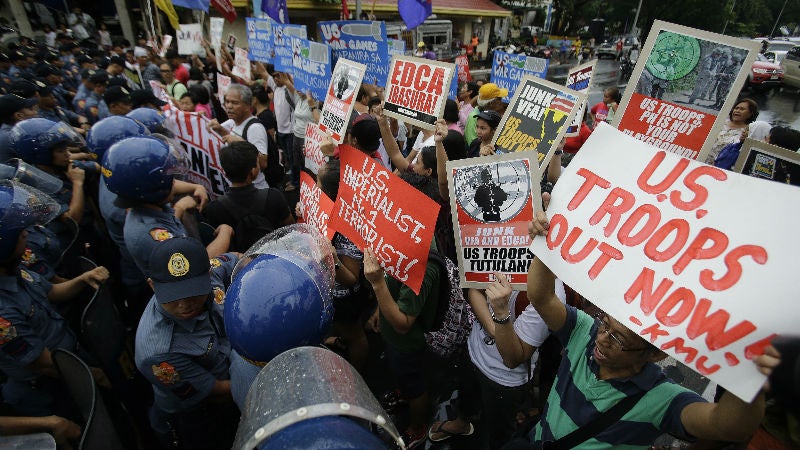 EMBASSY RALLY Policemen block protesters trying to get near the US Embassy during a rally against the Enhanced Defense Cooperation Agreement between the United States and the Philippines. AP

US AND Philippine Marine commanders stressed the value of joint training as American and Filipino forces opened combat exercises under some uncertainty on Tuesday, days after President Duterte said the drills would be the last in his six-year term.

Marine commanders from both sides said at the opening of the Philippine Amphibious Landing Exercise (Phiblex 33), involving 1,400 American and 500 Filipino military personnel, the drills were aimed at improving readiness by the two countries to respond to a range of crises while deepening their historic ties.

Last week, Mr. Duterte, angered by US criticism of his brutal war on drugs, said Phiblex would be the last war games during his term, which started on June 30.

Foreign Secretary Perfecto Yasay said, however, that the decision was not final, sparking questions as to whether other annual US-Philippine military exercises would proceed as planned.

US Embassy officials said Manila had not formally notified Washington of any move to scrap other planned drills.

Such a move by Manila would impede Washington’s plans to expand the footprint of US forces in Southeast Asia to counter an increasingly aggressive China.

War games between US and Philippine forces are held every year under the Visiting Forces Agreement, an offshoot of the Mutual Defense Treaty signed by the two countries in 1951.

But angered by US warning that continued military aid to the Philippines was tied to his human rights record, Mr. Duterte on Sunday threatened to scrap Edca in his latest outburst against the United States that was full of typical invectives.

“This Edca is an official document…but it does not bear the signature of the President of the Republic,” he said at the opening of the MassKara Festival in Bacolod City, Negros Occidental province.

“The Americans, I don’t like them…they are reprimanding me in public. So I say: ‘Screw you, fuck you,’” he said, while signaling again that he wanted to forge closer alliances with China and Russia.

“Better think twice now because I will be asking you to leave the Philippines altogether,” he added.

Navy Capt. Jeff Davis, a spokesperson for the Pentagon, said the US military was aware of Mr. Duterte’s comments.

“It hasn’t really so much translated into tangible actions that we’ve seen with regards to our actions under the alliance,” he said.

“In as much as our alliance with the Philippines is concerned, it’s very much solid and stable and secure and on track,” Davis said, pointing to continued cooperation in operations in the southern Philippines.

Marine Capt. Ryan Lacuesta, a spokesperson for the Philippine side of Phiblex, sidestepped the question of whether Mr. Duterte’s remarks had affected the troops and the atmosphere of the joint exercises, partly staged to improve camaraderie between the two combat forces.

“As much as I would like to answer that question, I would leave that to higher authorities,” Lacuesta said on Tuesday.

Costales said that by focusing on the shared vision of integration and interoperability, the two sides would be able to demonstrate their strong bond as military friends and allies.

He said the mission of Phiblex was to integrate the use of strategic sea-lift vessels and other nontraditional platforms, such as landing craft from Australia and small riverine craft from the United States.

The goal, he said, was to prepare the ground for the Philippine Marines to build up, with or without external interventions, including the rehearsal for the activation of the Marine combat component of the Armed Forces of the Philippines’ rapid reaction force and the use of landing and offloading sites other than those traditionally used in previous exercises.

“Our vision is not for our nation’s Marines alone, it involves the international and regional partner armed forces as well,” Costales said.

The strong bond between the two combat forces, Jansen said, builds on impressive levels of interoperability, readiness and response when faced with crisis.

“We share so much in common, right down to our interwoven values: honor, duty, heroism—that is what makes the fabric of our forces, so strong and proud,” he said.

Jansen said the exercises were specifically designed to enhance the capabilities of the two combat forces and strengthen their ability to cooperate for disaster relief and regional security.

But more stress will be given to humanitarian assistance to improve the capabilities of the two combat forces to save lives during disasters, he said.

Phiblex ends on Oct. 12. With reports from AP and AFP