‘I would break up with America eventually,’ says Duterte 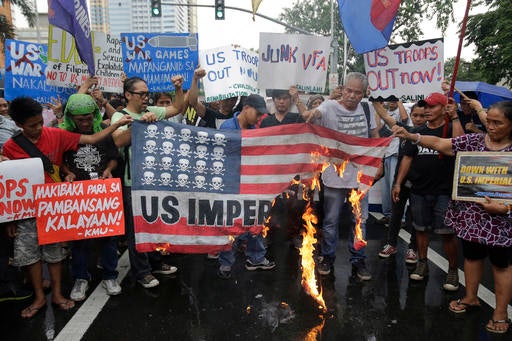 Filipino activists burn a mock U.S. flag during a rally against the Enhanced Defense Cooperation Agreement (EDCA) between the U.S. and Philippines in front of the U.S. embassy in Manila, Philippines on Tuesday, Oct. 4, 2016.  AP Photo/Aaron Favila

CITING the government’s “recalibrated” foreign policy, President Rodrigo Duterte on Tuesday said he would soon cut ties with the United States during his term amid continued criticisms against his war on drugs.

In his speech before the Jewish Association of the Philippines in Makati City, Duterte said he would rather go to China or Russia, affirming his previous pronouncements of “crossing the Rubicon” and forging alliances with the two known US rivals.

“I would be reconfiguring my foreign policy. Eventually in my time I would break up with America. I would rather go to Russia or to China. Even though we don’t agree with the ideology, they have respect for the people,” Duterte said during the Jewish New Year feast at the Beit Yaacov Synagogue.

Duterte earlier said he would explore alliances with China and Russia as he continued to rant about the United States and its criticisms against extrajudicial killings and human rights violations in the government’s relentless antidrug campaign.

The President said the war on drugs will not stop despite the “hypocrisy” of the US and other international bodies and human rights groups.

“I will not stop despite the hypocrisy of EU, and America and Obama. They seem to refuse to understand,” he said.

In an earlier speech before businessmen, Duterte lashed out US President Barack Obama and the European Union anew, saying the former “can go to hell” while the latter “better choose purgatory.”

Duterte previously threatened to stop the Philippines-US Enhanced Defense Cooperation Agreement (EDCA) and end war games between the two countries. The President also said he was considering purchasing weapons from China and Russia despite a maritime dispute with Beijing.