Filipinos abroad can now trade up to P50,000 in old bills 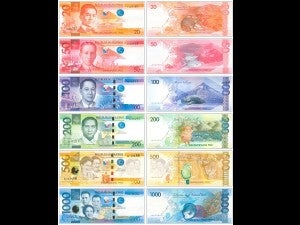 MANILA — The Bangko Sentral ng Pilipinas has raised to up to P50,000 the maximum amount of old bills that Filipinos living and working abroad can trade ahead of the demonetization of the so-called New Design Series (NDS).

In a statement Monday, the BSP said the Monetary Board, its highest policy-making body, last month increased from just P10,000 previously the allowable amount of NDS banknotes to be exchanged by Filipinos overseas for the New Generation Currency (NGC).

“The BSP reminds overseas Filipinos who wish to avail of the NDS Banknote Exchange Facility to register their NDS banknote holdings at https://orbs.bsp.gov.ph starting Oct. 1 to Dec. 31, 2016. Overseas Filipinos who will be able to register their NDS banknote holdings within this registration period have one year from date of registration to present their original passport and printed confirmation notice to any BSP office for the processing of the NDS exchange,” the BSP said.

“Overseas Filipinos deployed to countries experiencing geopolitical crisis during the registration period who may not be able to register their NDS banknote holdings need only to present their original passport with exit stamp by authorities from war-torn countries and/or authorities from other countries that served as exit points for repatriation to any BSP  office for processing from Jan. 1 until Dec. 31, 2017, subject to the P50,000 limit for each overseas Filipino,” the BSP added.

The BSP will undertake piece by piece verification of all NDS banknotes that will be submitted for exchange.

Next year, all old banknotes will no longer be accepted in transactions nor traded with the BSP and banks, as they will have no monetary value.

Only the NGC banknotes series being issued since 2010 will remain legal tender in the country starting 2017.  SFM

Unique is the ‘original composer’ of ‘Mundo’, his mom asserts amid #GiveCreditsToZildBenitez