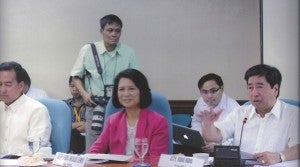 MANILA—The 2003 Overseas Absentee Voting Act (OAVA) requires overseas Filipinos wishing to register to vote to first execute an “affidavit of intent to return” to the Philippines within three years and if they  fail to do so within that three-year time period, they may face penalties that include imprisonment of up to one year. The absurdity of this “killer clause” provision was exposed during the September 26 joint hearing of the house committees on Suffrage and Foreign Affairs to discuss amendments to the OAVA.

As we were attending the Global Summit of Filipinos in the Diaspora in Manila last week, Atty. Loida Nicolas-Lewis from New York, Dr. Abraham Rasul, Jr. from Washington DC, Lolita Farmer from Australia and I appeared at the Batasan hearing in Quezon City to testify in support of the “amendatory bill” to the OAVA that would remove the affidavit of intent to return requirement. We all agreed that this provision was the single most damaging cause for the low registration of overseas Filipinos.

How can you ask permanent residents in the US — who spent 10-20 years waiting for their immigrant visas to finally arrive so that they could immigrate to the US to join their relatives there – to give up all their dreams of a better life in the US to return to the Philippines within three years just so they can vote in Philippine elections?

How can you ask a contract worker in Saudi Arabia or a merchant marine aboard a commercial vessel somewhere in the world to give up the jobs that sustain their families in the Philippines – and the Philippine economy – to return to the Philippines within three years just so they can vote in Philippine elections? 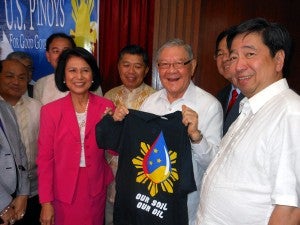 Who wants to risk possible imprisonment just for exercising the right to vote?

After we testified, Rep. Rodel Batucabe outlined the amendatory provisions in House Bill 3201and a discussion followed. Although they raised various points, none of the Representatives supported the retention of the affidavit of intent to return. At one point during the discussion, Rep. Elpidio Bascara, the chair of the house committee on suffrage, was perplexed and asked if anyone knew why this patently offensive provision was even included in the OAVA in the first place.

Everyone just shrugged their shoulders with a few commenting that they were not in office in 2003 when the bill was enacted. Bascara then asked Commission on Elections (Comelec) Commissioner Armando Velasco if he knew the answer. Velasco said that he wasn’t in office at the time either and concurred with our assertion that it was the major obstacle to the registration of overseas voters. 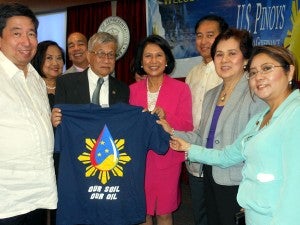 Velasco explained that the registration form for OAV applicants requires them to check the box that states that they had filled out the affidavit of intent to return within three years. “If the box is not checked, we reject the application,” he said.

When no one else in the packed hearing room of the Batasan could answer the chair’s question about the rationale for this provision, I raised my hand. The chair called on me and I explained that one House member (Rep. Teddy Boy Locsin) inserted this provision because he said the bill would otherwise be unconstitutional. He cited Section 1 Article 5 of the 1987 Philippine Constitution which requires that voters “shall have resided in the Philippines for at least one year and in the place wherein they propose to vote for at least six months immediately preceding the election.”

I said that except for members who represent districts in Metro Manila, most of the members of Congress do not actually reside in the districts they represent and that fact has not prevented them from running for office and voting in their provincial precincts. Besides, I said, Section 2 of Article V of the same 1987 Constitution gave Congress the explicit power to provide “a system for absentee voting by qualified Filipinos abroad.” The Constitution provided no conditions or restrictions for the system that Congress would set up for overseas Filipinos.

After all, if the 1987 Constitution, according to Locsin, provides Congress with the power to provide a mechanism for excusing the “residence” requirement by the simple execution of an affidavit to return within 3 years, then Congress has the power to extend the time period to 10 years or 20 years or to set no time period at all.

At that point in the committee deliberations, House Speaker Feliciano “Sonny” Belmonte entered the hearing room and sat down beside the committee chairs. He spoke in favor of the “long overdue” amendatory bill that would remove the affidavit of intent to return. House Minority Leader Edcel Lagman also spoke in favor of HB 3201.

Rep. Rufus Rodriguez then moved to rename the bill the “Overseas Voting Act” removing the word “Absentee”, which was the request of Dr. Rasul who observed that “absentee” has negative connotations. His motion was unanimously approved as well.

The house committee members could not vote on the other suggestions regarding Internet Voting and the removal of the biometric requirement for overseas voting registration so these were deferred to another time. The joint hearing then adjourned.

After the hearing, Comelec Commissioner Velasco invited our US Pinoys for Good Governance (USP4GG) to attend an “OAV Summit” at the Comelec HQ on September 29. The summit participants, he said, include the Department of Foreign Affairs (DFA) and other government agencies and non-governmental organizations (NGOs) representing “stakeholders” in overseas voting.

I accepted the invitation and attended the meeting along with Atty. Ted Laguatan, USP4GG spokesman. At the OAV Summit, Comelec Chair Sixto Brilliantes, Jr. announced that the Comelec target for the 2013 national elections would be one million, doubling the current number of registered voters. Overseas voters registration, he said, would begin on October 31, 2011 and proceed until October 31, 2012.

There was just one problem, he said. The Comelec may be required to remove the names of 246,000 registered overseas voters from the 589,830 names on the registered OAV list because they did not vote for two consecutive election cycles and Philippine law requires their removal.

But, Brilliantes added, the Comelec decided in a recent meeting to just move their names to a separate list so that if they come to vote in the May 2013 elections and their names are on this other list, they will be allowed to vote.

The stakeholders had explained to the Comelec that there are 200,000 Filipinos working on commercial vessels and most could not vote in the original ports they registered in. Representatives of the more than 1.2 million Filipinos in Saudi Arabia testified that many of the homes in the Middle East have no street numbers. Letters are usually sent to the home owners whose identities are known to the local post office.

On the issue of the affidavit of intent to return, the Comelec chair explained that the commissioners all support its removal but will await action by Congress on the amendatory bill. I noted that the current Congress may not pass the bill until shortly before it adjourns in June of 2012. In the meanwhile, what happens to the 2-4 million immigrants who are discouraged from registering to vote because of this affidavit of intent to return?

Atty. Laguatan suggested that the Comelec ignore this unconstitutional provision as he distributed copies of former Chief Justice Artemio Panganiban’s article in the Philippine Daily Inquirer (Enfranchising ‘duals’ and ‘greens’, September 17, 2011) where Panganiban opined that the unanimous 2006 Philippine Supreme Court decision in Nicolas-Lewis vs. Comelec not only enfranchised dual citizens – extending to them the right to vote without the residence requirement – but that this also logically extends to “single citizens” as it would be a violation of the “equal protection of the law” if interpreted otherwise. Why should dual citizens have more rights than single citizens?

“Since the goal of the residency qualification is accomplished by the globalization of information, then the purpose of the law is fulfilled. Our brothers and sisters abroad should be allowed to vote during national elections without anachronistic roadblocks. After all, being the single biggest source of foreign exchange, they keep our economy afloat,” Panganiban wrote.

The Comelec commissioners said that they would consider our suggestion when they meet “en banc” next week.