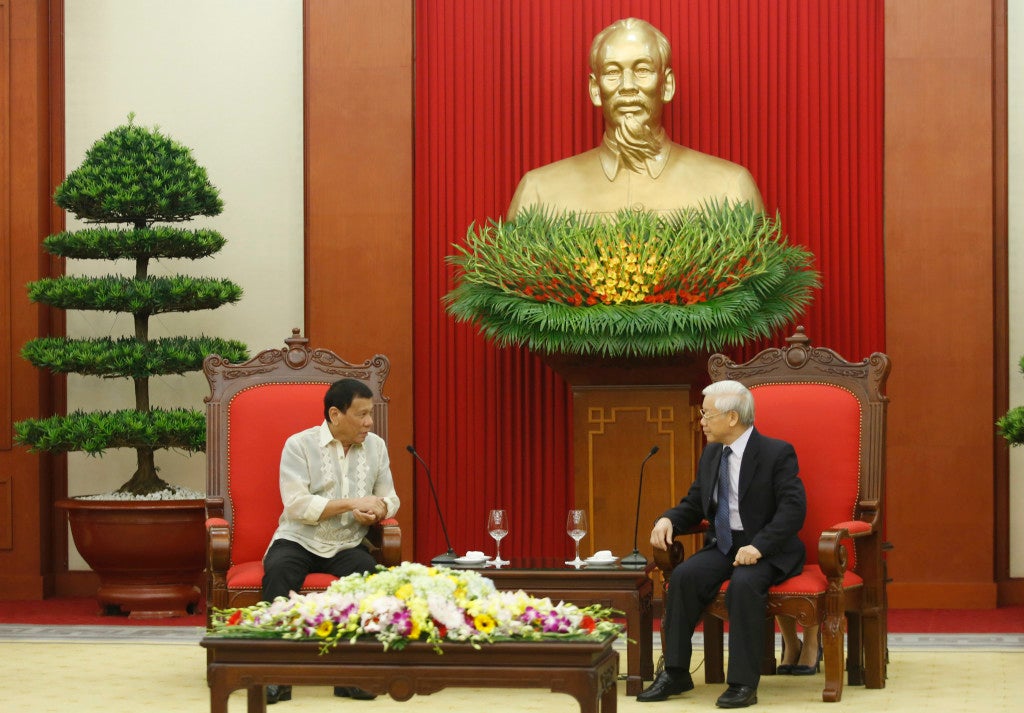 HANOI—President Duterte has  invited more Vietnamese businessmen to invest in the Philippines, and to consider importing more Filipino products to boost two-way trade.

The President made the pitch in bilateral talks with Vietnam State President Tran Dai Quang on Thursday at the State Palace of Vietnam.

Both countries “agreed to really level up the trade that we have by increasing trade numbers,” Trade Secretary Ramon Lopez, who was part of the president’s delegation, told a press briefing.

“The President invited Vietnamese corporations to invest in the Philippines. We’ll protect your investors and your investments, contracts will be honored,” Lopez said, adding that Mr. Duterte gave assurances that Vietnamese investments would be protected and the government would provide a more conducive investment climate.

The President arrived at the State Palace at 10 a.m., Thursday, to military honors and an official welcome by Tran.

Earlier in the morning, Duterte took part in a wreath-laying ceremony at the National Monument for Heroes and Martyrs in Hanoi.

Aside from Tran, he met with Vietnamese Prime Minister Nguyen Xuan Phuc and Nguyen Phu Trong,  general secretary of the Central Committee of the Communist Party of Vietnam.

Apart from being Southeast Asian neighbors, the Philippines and Vietnam are both claimants to disputed territories in the South China Sea, which are  being claimed by China. Vietnam earlier expressed support for the Philippines’ arbitration case against China, which Manila won in July.

Lopez noted that there were more Philippine investors in Vietnam, citing  Universal Robina Corp., San Miguel Corp., Ayala Group, Jollibee and  Splash, among others. About 48 percent of Manila’s rice requirements are imported from Vietnam.