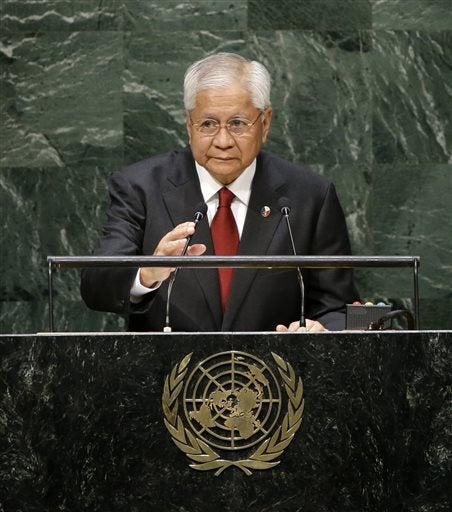 In this undated file photo, Albert del Rosario appears at the United Nations, as secretary of the Philippines’ Department of Foreign Affairs during the presidency of Benigno Aquino III (AP)

MANILA — “Unfortunate.” This was former foreign affairs secretary Albert del Rosario’s assessment of the policy direction being pursued by the Duterte administration, as the think-tank named after him claimed investors would be deterred by a supposedly “independent” foreign policy.

“I think they should review what they mean by an ‘independent’ foreign policy. It should not be a zero-sum game,” Del Rosario told reporters on the sidelines of an economic forum organized by the Stratbase-ADR Institute for Strategic and International Studies Wednesday.

“While the President’s mandate to define the country’s approach to foreign relations is unassailable, the administration should nevertheless reconsider its strategy in terms of potentially alienating established economic and security partners. The Philippines should maintain its good relations with trusted friends and pursue constructive relations with all of its neighbors, in both word and deed,” Manhit said, referring to the recent friendly moves by the President to China and Russia while being unfriendly to the EU and the US, both among the country’s top trading partners.

“Unfortunately, in President Duterte’s case, the term ‘independent’ appears to be shorthand for pushing the United States away and pulling China closer. Although his spokesmen and secretaries would issue follow-up statements to clarify the president’s meaning, these do little to mask his sentiments on the Philippines-US relationship,” Manhit said.

“The country can pursue its independence without squandering its hard-earned, advantageous relationships with other countries. The government’s new stance must be calibrated to ensure that it does not compromise the administration’s ten-point plan and the Philippines’ overall economic security,” the ADR Institute said in a statement.

For Manhit, “the Philippines can keep its friends while making new ones.”

Agreeing with Manhit, Del Rosario told reporters: “I think we should go back and consider that our foreign policy must be deeply rooted, and therefore, we must have foreign policy that is principled, independent, and in accordance with the rule of law.”

Del Rosario said other diplomats were puzzled why there was a shift in the foreign policy.

For Del Rosario, it was a “difficult question to answer.”

“I like to think that the foreign affairs strategy may be driven off-track a bit and perhaps we can persuade this government to revisit the off-track direction that is driving the so-called new foreign policy,” Del Rosario said.

The former foreign affairs chief also warned that the Philippines might lose bilateral trade perks being  enjoyed as well as grants from the US and the European Union.

For Del Rosario, the most important thing that the past administration had left the Filipino people was an “immense amount of confidence,” adding: “Let’s not lose it.”

Asked if the Duterte administration’s foreign policy could still be tweaked, Del Rosario said: “We can always change our course for the betterment of the Filipino people and in accordance with national interest.”

As for the plan to pursue closer ties with China, Del Rosario said “it doesn’t have to be a zero-sum game; you can pursue the friendship of other nations without having to sacrifice those who all the time had been there to help us.”

The ADR Institute said “the government’s warming up with China signal a quick break from the United States and is unfortunate.”

“It is one thing for the administration to downplay the arbitral tribunal’s favorable ruling, out of a fear of possible retribution. It is another thing entirely to halt patrols with the United States and limit them to a minimal 12-nautical mile distance—far less than the full 200-nautical mile spread of the country’s exclusive economic zone,” the think-tank said. The ADR Institute was referring to the victory of the Philippines at the United Nations-backed Permanent Court of Arbitration in The Hague, Netherlands, which recognized the exclusive economic zones of the Philippines in the South China Sea and set aside China’s nine-dash claim.

“By taking such drastic steps, the administration gives the impression of swinging wildly and insincerely instead of taking smaller, but more meaningful steps toward friendly relations,” ADR Institute said.

“Being careful with pronouncements and calibrated with government actions will send a more meaningful signal not only to China, but also to all of the Philippines’ international partners. Such care will help the president and his team achieve the Philippines’ foreign policy objectives,” Manhit said. SFM