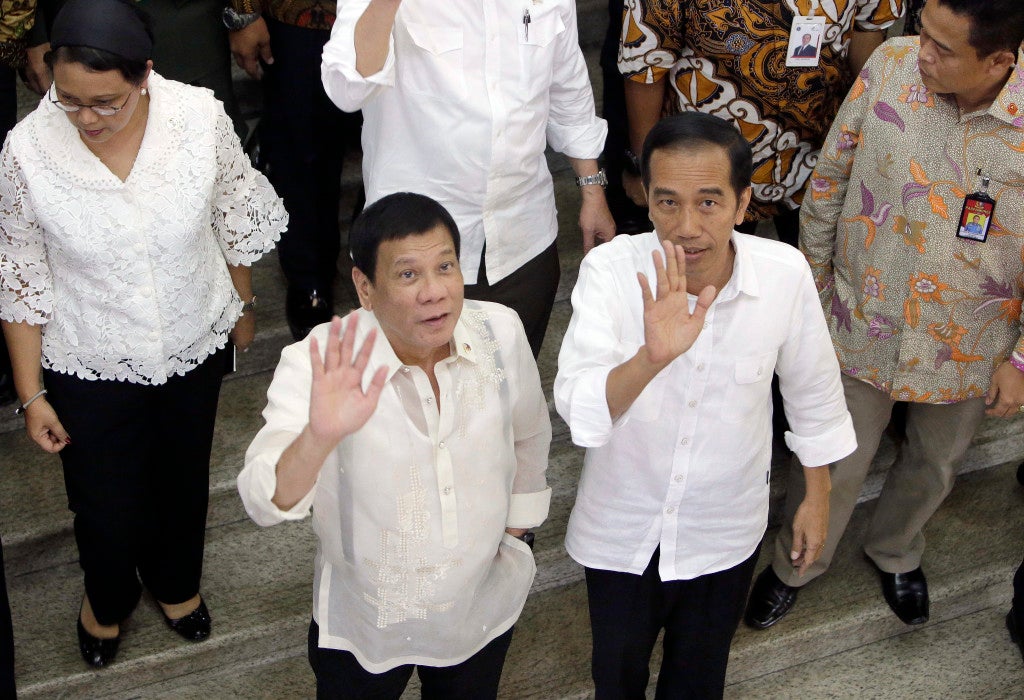 Philippines’ President Rodrigo Duterte, center left, waves with his Indonesian counterpart Joko Widodo during their visit at Tanah Abang Market on the sidelines of their meeting in Jakarta, Indonesia, Friday, Sept. 9, 2016. Duterte is currently on a two-day visit to the country. AP

MANILA — The Philippines is seen at a “low” risk of facing leadership upheaval, junking market-friendly policies and succumbing to violent change and major conflict despite escalating political noise around the new CEO of the land, Rodrigo Duterte.

Manu Bhaskaran, chief executive officer of the independent research and advisory firm Centennial Asia Advisors Pte Ltd., weighed key risks faced by selected territories in the region based on seven metrics seen most important from the point of view of businesses.

The Philippines was seen to have a “low” risk in the following areas: leadership uncertainty, anti-market ideological shift, violent change and major conflict.

In a presentation during the Philippines Investment Conference 2016 organized by CFA Philippines, Bhaskaran assigned “moderate risk” to three other metrics: having overly nationalist stance, having riots/business disruption and having regulatory changes, particularly in labor laws. In the case of riots and business disruption, the analyst noted that the “moderate” risk was even falling.

Two other countries in the region, however, were noted to have “moderate” but “rising” risks of leadership uncertainty: Thailand and Malaysia. For Thailand, the much-loved monarch King Bhumibol is ageing and ill while in Malaysia, Prime Minister Najib Razak has been involved in a corruption scandal that triggered mass actions.

During the open forum, Bhaskaran also said the Philippines must balance its relationship with the US and China in order to get the best of both worlds as these two economic superpowers have been vying for, and would continue to vie for greater influence in Asia-Pacific. Typically, he said any small country would not like any big power to stay away from it.

But given two choices, he said the key would be to “make the best of a bad situation while ensuring the independence of your country.” “We want China to be well, to grow, be confident and be secure and grow smoothly,” he said, adding however there’s also a need to hedge and achieve balance. “You need to be engaged with both, have communication lines open with both. You need to work with allies, work with Vietnam, work with Asean (Association of Southeast Asian Nations),” he said, noting however that Asean must be strengthened as an organization.

Asked about President Duterte’s pronouncement to strengthen relations with China and Russia, he said it would always be good to be friends with everyone.

Nonetheless he said, it would be better for the US to be engaged in the region, in terms of alliances, location of assets and surveillance. He noted that a lot of countries with a friendly attitude to China in public likewise had engagements with the US. In the end, he said the Philippines should not underestimate the US resolve.  SFM