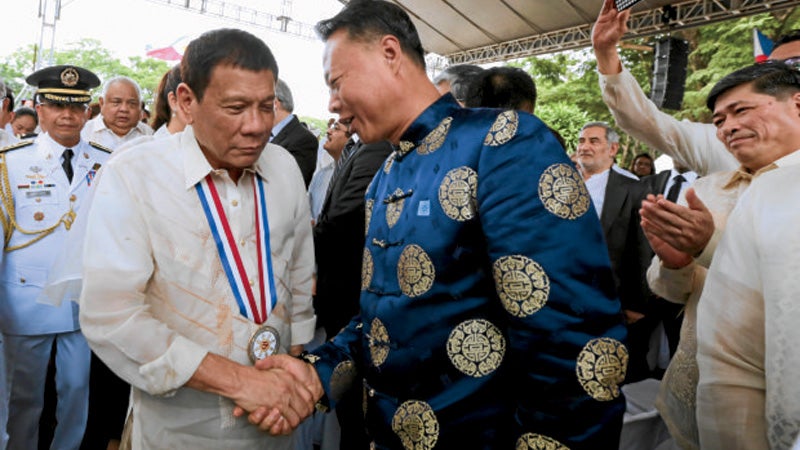 President Rodrigo R. Duterte shakes hands with Chinese Ambassador to the Philippines Zhao Jianhua during the celebration of the National Heroes’ Day at the Libingan ng mga Bayani in Taguig City on August 29. KING RODRIGUEZ/PPD

Relations between China and the Philippines are improving “beautifully” under President Rodrigo Duterte, Beijing’s envoy has said as Duterte warms to China and Russia following US criticism of his bloody war on crime.

Duterte has rejected the criticism, including by long-time security ally the United States, and said he would seek closer economic ties with China and Russia.

“The clouds are fading away. The sun is rising over the horizon and will shine beautifully on the new chapter of bilateral relations,” Zhao said according to a copy of the speech released by the mission Wednesday.

Zhao said the two neighbours had been engaging in “friendly interactions” since Duterte took office nearly three months ago.

This was in stark contrast to fraught ties under Duterte’s predecessor Benigno Aquino III, whose government lodged a case at an international tribunal in 2013 seeking to outlaw Beijing’s territorial claims over most of the South China Sea.

In July the tribunal rejected most of China’s claims as well as its extensive island-building in disputed waters.

Duterte has however stressed he would not risk war by enforcing the ruling, preferring quiet diplomacy to persuade China to abide by the verdict.

Duterte has responded with abusive comments against critics of his war on crime.

In his latest remarks late Tuesday, he accused the US of “manipulating” the peso, which hit a seven-year low to the dollar on Monday, and dared investors concerned about his crime war to leave the Philippines.

Many market analysts said the market was spooked by the breakdown in the rule of law after Duterte’s anti-drug crackdown left more than 3,700 people dead. Rights groups say some of them had been summarily executed.

“The Chinese side fully understands and firmly supports the Duterte administration’s policy that (prioritises) the fight against drug crimes,” said Zhao on Tuesday, adding China would assist in the drug war.

Zhao also said China would increase investments in infrastructure in the Philippines, as well as trade and tourism.

The Philippines, a former American colony, had until Duterte been one of the United States’ oldest allies in Asia.