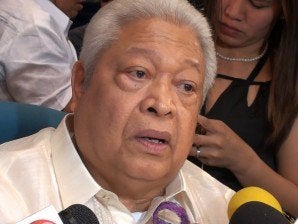 This was how opposition lawmakers described on Tuesday the state of the country as they expressed concern over how President Duterte’s “reckless utterances” as well as recent incoherent policies have impacted on the economy.

“During the Aquino administration, the worldwide perception is our country is one of the brightest stars. But I think, it has lost steam because of several reasons,” Caloocan Representative Edgar Erice said in a press conference.

Erice enumerated them as “the reckless utterances of the President; the clashing statements of government officials” and the lack of clarity in foreign policy.

“This is a big thing. If the interest of foreign investors in our country has not only declined, it has stopped altogether,” said Erice, a staunch ally of former President Benigno Aquino III.

Lagman and Erice are both members of the Liberal Party who remained with the House minority.

“While there are also ‘external factors’ that have led to the decline of the peso, the big challenge is governance,” Villarin said.

Villarin said the lack of “clarity and coherence” in the Duterte administration’s policies have led to the “troubling indicators” such as the slowdown in foreign direct investments (FDI), among the country’s key economic benchmarks.

The lawmakers said the latest foreign policy of the President, where he said he would strengthen ties with China and Russia after “crossing the rubicon with the US,” would certainly impact on the country’s economy.

“We should not be demeaning our traditional economic partners because that has sustained the economy of the country for so long a time,” Lagman said.

Erice also pointed out that the European Union and Australia have been “important trade partners and yet the President is trying to sacrifice all these relationships just to defend his human rights records.”

Erice said Duterte appeared ready to lose the Philippines’ long-standing allies and partners in the international community “as long as his war on drugs is not affected.”

For Duterte, illegal drugs seemed “to be the only problem of our country,” Erice said.

The peso plunging to a seven-year low comes as the House of Representatives conducts its plenary deliberation on the government’s proposed P3.35 trillion General Appropriations Act (GAA) for 2017, which Villarin described as a “spending spree budget.”

“But with the economic downturn, the projected deficit of three percent of the Gross Domestic Product (GDP) will be bigger and our default (move) would be to borrow,” Villarin said.

“Because of our good credit rating, we have a low interest in our borrowings. But with a possible downturn in the economy, by December, November we have another credit ratings upgrade or downgrade, so it will also affect the capacity to pay the loans. What we are looking at is we are on perilous grounds, our economy,” Villarin said.

Lagman said that without fresh foreign investments and the uncertainties created by President Duterte’s policy pronouncements, the Philippines might lose the “opportunity… to have a good credit rating,” the measure of a government’s creditworthiness.

“This is important for the Philippines — the credit rating — because it will give us ready access to foreign loans and the government is embarking on procuring foreign loans,” Lagman said.

Under then President Aquino, the Philippines secured around 24 credit rating upgrades, largely due to strong macroeconomic fundamentals, government reforms, and investment prospects.

“We are concerned with the economic indicators that point out that there are troubling signs in our economy. It is not just looking at the peso but the FDIs and of course, everyone is on wait and see, the foreign investors, at least for a year. If your FDI goes down, that is an indicator that means investors are not moving in,” Lagman said.

Administration lawmaker, Davao City Rep. Karlo Nograles, said the decline of the peso should not be blamed on the President.

In a statement, Nograles said “global market forces is the main culprit behind the series of drops in the Philippine Stock Market and has nothing to do with President Duterte’s anti-drug war policy and his alleged verbal attacks against western leaders.”

“Portfolio investments should not be used to gauge the economy because there are many factors that affect the stock market that’s not necessarily reflective of a country’s economic position. The country’s economic viability as a location for investment is more closely reflected by its inflows of foreign direct investments, which is expected to grow even stronger once the administration has succeeded in winning the fight against crime and drugs. Peace and order is a key consideration for FDI locators, ” Nograles said.  SFM/rga