‘Rizal in USA’ lecture to be held at Chicago PH consulate 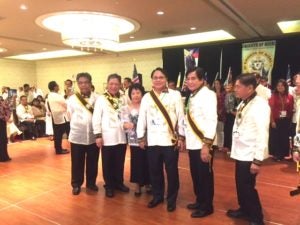 Ambassador Generoso Calonge,(4th from left) Consul General in Chicago is conferred the rank of Knight Grand Order of Rizal (KGOR) Sept. 4 at the KOR regional assembly in Elizabeth, New Jersey. He heads the Knights of Rizal’s “Maynilad Chapter” in Chicago. PINOY/ANONG

CHICAGO– A lecture tracing the month-long, cross-country US travel of the Philippine National Hero, Dr. Jose Rizal, from April to May of 1888 will mark October–Filipino American History Month on Thursday, Oct. 20 at 5 p.m.

The Knights of Rizal Central U.S.A. Area, in cooperation with the Chicago Consulate General, will present “Rizal in USA,” at the “20th Pagkikita sa Konsulado,” a monthly community dialogue sponsored by the local consulate.

Felix Gonzales, KGOR, will use a slide show of historical photos of the period in the U.S. that were most likely encountered by Rizal, who started his journey in San Francisco, ending it in New York prior to his second European sojourn. Rizal’s stopover in Chicago lasted 14 hours on May 8.

Rizal in his diary mentioned his being quarantined for a week upon arrival of the ship he took from Japan. US Customs officials cited an epidemic in Asia. Rizal believed that an anti-Chinese immigration policy was the real reason. Later in a letter to his friend, Mariano Ponce, he concluded that America was a good place to stay—for the white race.

Discussion will follow after the travelogue and will touch on Rizal’s relevance to the present US-Philippine relation here and back home.

ConGen Generoso Calonge emphasizes putting Rizal’s teaching on the forefront of the community’s activities in his jurisdiction. He is the commander of the newly formed Knights of Rizal Chapter, Maynilad. He was elevated to Knight Grand Order of Rizal (KGOR), the second highest KOR rank, at the recently concluded regional assembly in New Jersey.

The Chicago, Magiting, Malaya and Maynilad Chapters of the Knights of Rizal are also co-sponsors of the event, which is open to the public. Due to limited seating, please reserve by calling the Consulate at 312-583-0621 or KOR Central USA Commander Mariano Santos at 847-329-1073.