Yasay tells UN: Keep off our war on drugs

UNITED NATIONS—Philippine Foreign Secretary Perfecto Yasay on Saturday pushed back against criticism of President Duterte’s war on drugs, telling the United Nations not to interfere.

READ: Philippines at UN tells world not to interfere

“We urge everyone to allow us to deal with our domestic challenges in order to achieve our national goals, without undue interference,” Yasay told the UN General Assembly.

READ: Yasay to UN: Duterte admin’s war on drugs has been misunderstood

There has been growing international alarm over the rising death toll from Mr. Duterte’s crackdown on the illegal drug trade, with human rights groups saying that security forces are engaging in extrajudicial killings.

Mr. Duterte, 71, won May’s presidential election in a landslide after vowing to eradicate the illegal drug trade in six months, and promising that 100,000 criminals would be killed in the process.

Since he took office on June 30, more than 3,000 people have been killed, about a third of them drug suspects shot dead by police and the rest murdered by unidentified attackers, according to the Philippine National Police.

More than 700,000 drug users have turned themselves in to police for fear of being killed, straining resources at the country’s rehabilitation centers.

Despite growing international criticism, including from the United Nations and US President Barack Obama, the controversial Mr. Duterte has said he won’t stop the campaign.

He has said killing drug suspects is lawful if police act in self-defense and urged armed citizens to shoot and kill drug dealers who resist arrest.

Witnesses have accused some police of gunning down people merely suspected of involvement in the illegal drug trade.

Addressing the UN General Assembly on Saturday, Yasay said the rule of law governs the campaign against illegal drugs, which, he said, had stunted the Philippines’ development.

“We have not and we will never empower our law enforcement agents to shoot-to-kill individuals suspected of drug crimes,” Yasay said. “Extrajudicial killings have no place in our society, and in our criminal justice system.”

Yasay said Mr. Duterte enjoyed a 92-percent approval rating at home for his stance and suggested that his campaign was misunderstood.

“Our actions, however, have grabbed both the national headlines and international attention for all the wrong reasons,” he said.

He argued that corruption and drugs had “torn apart many of our communities, destroyed our families and snuffed out the hopes and dreams of our people—young and old—for a bright future.”

Invoking the United Nations’ new sustainable development goals adopted last year, Yasay said the Philippines would not be able to meet those goals without tackling corruption and drugs. 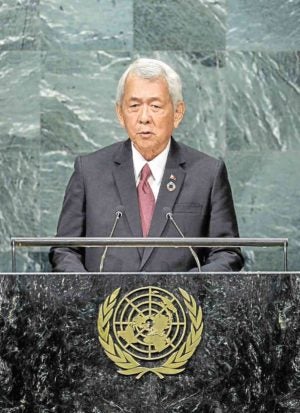 Relations between Mr. Duterte and the United Nations have been tense after the newly elected leader launched several tirades against the world body for its criticism of his tactics, even threatening to pull the Philippines out of the world body—a threat he later withdrew.

Earlier this month, the President declined a meeting with UN Secretary General Ban Ki-moon on the sidelines of a meeting in Laos of South East Asian leaders.

On Thursday, the foul-mouthed Mr. Duterte hurled insults at Ban and the European Union, whose parliament adopted a resolution on Sept. 15 urging the Philippines to put an end to the extrajudicial killings and allow an independent investigation of the rights abuses.

Mr. Duterte, however, said he would invite the UN chief and EU officials to investigate his war on drugs, but only if he could question them in public afterward to prove their human rights concerns were baseless.

He accused his Western critics of hypocrisy for raising concerns about his brutal campaign against drugs while launching military strikes that have killed innocent people in the Middle East.

Mr. Duterte’s defiance of high-profile organizations and his insults on anyone, from Obama to the Pope, both of whom he has called “sons of bitches,” have amused Filipinos, but worried foreign governments, not the least the United States, which sees the Philippines as a vital partner in Asia in the face of a rising China. Reports from AFP, AP/TVJ

READ: UN body to look into PH rights implementation amid war on drugs

Read Next
DepEd overhauls group addressing education needs of Pinoy kids in Sabah
EDITORS' PICK
DOH: Too early to say COVID-19 cases are declining
Duterte praises military but slams police for poor discipline, corruption
Acer starts the year off strong with the Aspire Vero National Geographic Edition
The best of bayside and city living at SMDC’s Sail Residences
COVID-19 cases surging in all regions and provinces, says DOH
Over 3 Million worth of prizes to be won at Smart Padala’s SENDali Manalo Promo!
MOST READ
PBA gets crucial call from GAB for go signal under different setup as reboot of Governors’ Cup could come earlier
Marcos Jr. visits Cebu, stands as ‘ninong’ to mayor’s son
Djokovic has to comply with rules to go to Spain, PM says
Comelec is confident candidates will join debates, says spox
Don't miss out on the latest news and information.