LOS ANGELES — October is Filipino American History Month, and thousands of Filipino Americans from the Los Angeles area are expected to take part in one of the city’s biggest events celebrating their culture and history.

Filipino music legend Gary V will headline the evening, and for the first time his son Gab Valenciano will join him onstage. Dance-pop artist Jocelyn Enriquez, R&B group Kai and others, who helped start the Filipino American music movement during the 1990s, will reunite after more than 15 years.

And for the millennial crowd, YouTube sensation AJ Rafael and The Voice Season 9 artist Tim Atlas are among those who are expected to perform. Actor Nico Santos from NBC’s new sitcom “Superstore” will help host the show, and culinary masterminds including Kristine de la Cruz and Lynne Tolentino will be onsite whipping up delicious Asian food for the attendees.

“We make up one of the fastest growing Asian American groups in the United States,” said Joel Jacinto, appointee of Mayor Eric Garcetti and the first Filipino American Commissioner for the City of L.A. Department of Public Works. “It’s important for the rest of L.A. to know who we are, and I think there is no better way to do that than through this exciting event for attendees of all ages.” 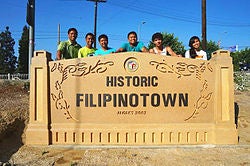 “This is a family-friendly gathering intended to bring together all Filipino Americans,” said event co-chair James Santa Maria, who helped establish the planning committee for this historic event. “Filipino Americans make up the largest Asian American group in California, and they have a rich history in our city. This is a perfect opportunity to showcase their talents and contributions.”

Also in honor Filipino American History Month, the Department of Public Works and Councilman Mitch O’Farrell have led the effort to install 54 Filipino designed streetlights throughout Historic Filipinotown, home to the largest population of Filipinos outside of the Philippines. Local artist Roel Punzalan’s designs symbolizing Filipino culture and the ethnic diversity of Historic Filipinotown will transform the lighting fixtures along Temple Street next month.

“We’re so excited to put our Filipino pride on full display,” said event co-chair Hildy Aguinaldo. “October 1587 was when the first Filipino immigrant was documented in America. I encourage all Filipino Americans to take time out this month to celebrate our roots.”