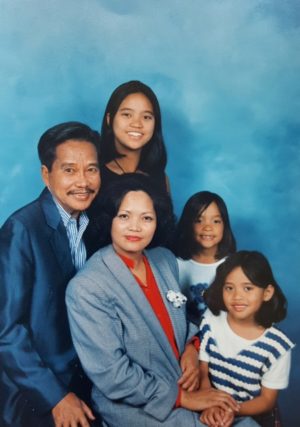 Liberty Zabala’s family; she is the youngest child (right). CONTRIBUTED

SAN DIEGO, California — Her father named her “Liberty” because she was born one day before Independence Day and her immigrant parents loved this country. Her middle name is “Angel” because she survived as a three pound premature baby.

Liberty Zabala, daughter of the late expatriate Philippines journalist and foreign-service diplomat Larry de Venecia Zabala, is now in her 20s, has indeed survived and risen to a full-time reportorial position in a major news outfit in this city, NBC7.

An Emmy-nominated reporter, Zabala previously worked as one of four reporter trainees selected from across the country for the NBC Reporter Development Program.

Under the program, she went through intensive multimedia training alongside NBCUniversal’s top media executives, talents and coaches at NBC5 Dallas, NBC10 Philadelphia, and NBC4 New York under the direction of The Poynter Institute’s Al Tompkins.

She writes, shoots, edits and reports enterprise stories for three live newscasts a day on NBC7.

San Diego County, according to the Filipino American Center of San Francisco Public Library, has the second largest Filipino American population of any county in the nation, growing to 182,248 in 2010.   Los Angeles County has the largest with more than 374,000 in the last census. 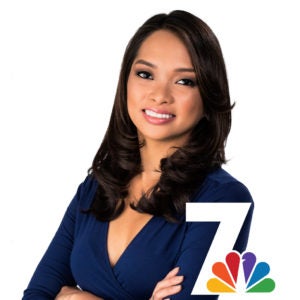 Born and raised in the Los Angeles neighborhood of Eagle Rock, Liberty said the biggest challenge she faces as a news reporter for mainstream TV is conveying Asian American Pacific Islander (AAPI) issues for a mainstream audience.

“We have such a large Filipino American population in San Diego many of whom also serve in the military since this is a huge military town. I think it is important to have many Filipino reporters/anchors on air to reflect that population in our coverage,” she says.

She says there are no other Filipino reporters at her station, although a few Filipinos work behind the scenes at her news office.

“I try to find angles that would make a mainstream audience care about the issues we face as Asian Americans. I try to do that in my work as a journalist because it is important that mainstream TV news accurately covers AAPI issues and reflects the community it serves,” she explains.

Catering to its large Filipino population, another major news program, San Diego’s Fox TV News has also recently put news veteran Kristina Audencial as one of its morning anchors, one of a handful Filipino American faces leading a news team in the US.  Kristina’s parents, Rico and Jennifer Audencial, are originally from Pasig City.

For Liberty, some of her most memorable stories include reporting on a breaking news coverage of the Central American immigration crisis, covering the May firestorm that burned across San Diego county and most recently, covering the San Bernardino terrorist attacks.

Prior to that, she worked as a multimedia journalist for KCOY/KKFX, the CBS/FOX affiliate covering California’s Central Coast.

Zabala is a graduate of California State University, Northridge, with a degree in journalism and a collateral in political science with an emphasis on international relations.

Liberty was selected as a Meredith Cronkite Fellow at the Walter Cronkite School of Journalism reporting for KPHO CBS5 in Phoenix, Arizona.

She is a dedicated member of Asian American Journalists Association where she served as a board director for the Los Angeles chapter and currently serves as the San Diego chapter president.

Her father, Laurencio “Larry” De Venecia Zabala, Jr., 85, passed away July 21, 2016, at 1 p.m. in the Intensive Care Unit of the Los Angeles Community Hospital. During the 1960s, Larry Zabala reported and wrote for the Manila Daily Bulletin, and during the 1970s and 1980s served as press attaché at the Philippine consulates in Singapore, Honolulu and Los Angeles under the late President Ferdinand Marcos.

Liberty told INQUIRER.net that she remembers her father as a man with integrity and strong sense of duty.  “My father was a very hard worker who believed in lifting others up. He instilled in me a strong work ethic and a sense of responsibility that I must use whatever gifts I am blessed with for good.”

“What I admired the most about him was his humble beginnings. He told me stories growing up dirt poor in Dagupan city in Pangasinan. I couldn’t imagine how my father did. He was truly blessed to be able to lift himself out of poverty to become such a successful and well-respected man,” she adds.

Her initiation to journalism came in junior year of high school when she needed electives before graduating. “I thought maybe I should join the campus paper since my father was a newspaper reporter.   After her first article got published, she “cranked out article after article.”

“There were times half the paper were articles written by me. I became the go-to staff writer for breaking news. I became managing editor of the paper within a year of becoming staff. That’s when I fell in love with journalism and when I knew I wanted to do this for the rest of my life.”