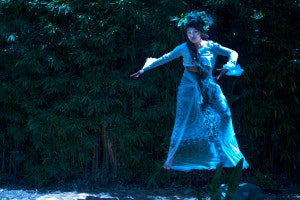 The show features Philippine dances in contemporary form. The story is about a mythological mountain, Mt. Makiling, in Laguna, Philippines, known for its shape that’s like a woman lying on the ground.

In this mythological story, Maria Makiling is known as an enchanted “diwata” who is given the most respect among all goddesses within the area. She’s known as a guardian spirit of the mountain.

Bae-Makiling, as inspired by this mythology, tells of a love affair between a mortal and an immortal. Parts of the story are reminiscent of Lord of the Rings’ love team, Arwen and Aragorn, where it was worrisome for the Elvin kingdom for the princess to fall in love with a human because his eventual death will break her apart. Similar to what has presented by the Bae-Makiling cast, Lakai, the main character in the story, falls in love with Ba-e Makiling, a forest goddess, during a hunting scene where he awakens Makiling’s spirits. 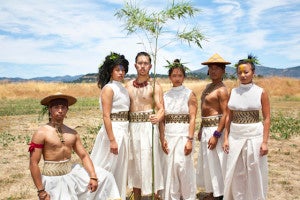 Several scenes show different traditional Philippine dances, in a contemporary form — Kalinga, Tinikling and other Northern and central Philippine dances staged during the scenes of healing and captivity. There are noticeable Southern Philippine movements in some scenes, including Sagayan from Maguindanao.

During a healing scebe, star dancer Jonathan Mercado performs special body isolations, as if each bone of his body would easily fly out any time. He puts himself into the scene, engaging the audience with eye contact.

“Lakai’s quest for love, his moments of loss, his betrayal of family and friends helps mold his decisions and his character. Playing his role is like playing myself in my past indigenous life,” Jonathan explains.

Ba-e Makiling has cultivated his artistry, developing him as a theater actor more than a dancer.

He adds, “It was super different for me this time around, it incorporated a lot more theatrical elements that helped tie ithe storyline to the show. I really had to engage my emotions into my movements and I had to take a lot of my own life experiences and adapt it to the character of Lakai.”

Master choreographer, Jay Loyola says, “The work explores a love affair between a mortal and deity as a metaphor for re-discovering and reclaiming the indigenous self that has been forcefully denied by centuries of colonization.”

“This dance work will also investigate the deconstruction of the rural dances of the Philippines,” Loyola adds. 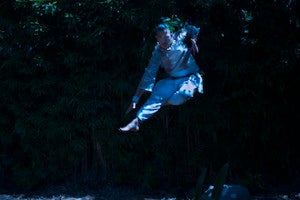 This is his third collaboration with Kularts, and Loyola brings in something new each time. Some parts are noticeably inspired by the Lenten tradition “Penitensiya.”

“The gestures to revere our deities were replaced by gestures to venerate the saints. It’s a symbolism of reclaiming what was taken away from us. They use suffering to indoctrinate our people,” Loyola explains.

A principal dancer of the Bayanihan Dance Company for years, Loyola describes his style as something that “encompasses a form and technique free of regionalism.” He says, “I want my dance to represent the Philippines as a country not by suites as popularized by Bayanihan. That’s my style and my brand.”

As far as music goes, Florante Aguilar goes all out with percussions in this production. Several Philippine instruments are used, including Kulintang, sarunai, luntang, gandingan kayo, agung, agung a tambul, agung a tamlang, tagutok, bulyos kolitong and sulibao.

Each track is unique and perfect for the scene. The details and the balance of the tracks are well orchestrated, giving each instrument a chance to be heard.

Co-producer and Florante’s wife, Fides Enriquez, says, “We had to hire a whole taiko drum ensemble to help us fulfill the music that we needed for some pieces.”

Considering how small Bindlestiff is as a venue, the production pays attention to a very intricate set design that provides a great feel of the forest, all created by Cece Carpio. This is well complemented by an amazing lighting design by known photographer Wilfred Galila, who masters the timing of each flash with the dancers’ movements. The size of the theater makes for an intimate, engaging and interactive experience with the audience.

This piece provides the Filipino arts and culture community a refreshing resource to get connected with indigenous practices, for better communication with the younger generation. It has been Kularts’ for decades has cultivated many talents including the cast of “Ba-e Makiling.”

Like wine, this trifecta of artists presents a phenomenal theatrical experience and it gets better each time.