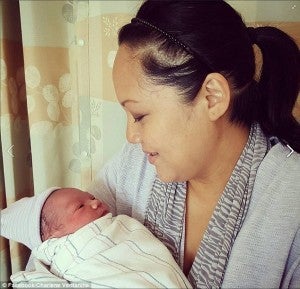 LOS ANGELES – Neighbors and police in Long Beach are wondering what drove a 36-year-old Filipina to stab her infant son to death before turning the knife on herself sometime before 6:30 a.m. on Tuesday, Sept. 13.

Ken Ventanilla returned to his home on the 1500 block of Park Avenue to discover the lifeless bodies of his wife, Charlene, and their eight-week-old son, Shane, apparently following what investigators have labeled a murder-suicide.

Officers dispatched to the residence found that both subjects had suffered multiple stab wounds to the upper body, according to a preliminary statement from Long Beach Police.  Mother and son were pronounced dead at the scene by the fire department.

The Ventanillas appeared to have a healthy and happy life, according to a neighbor of the family speaking anonymously.

“They had friends over,” she told the Orange County Register. “They had barbecues up there. Just a happy couple.”

She added that the newly widowed father was seen crying and struggling to maintain his composure as police interviewed him.

On Tuesday, investigators and forensics technicians gathered statements from other people living nearby and collected about six large bags of evidence before departing from the site of the crime at about 2 p.m., according to the OC Register. As officers were leaving, a small group of people was seen across the street from the family’s home huddled in a circle with their heads lowered.

The Ventanillas have another son, who is two years old.

Anyone with information that might help the Ventanillas and law enforcement better understand why such a tragedy took place is encouraged to contact detectives of the Long Beach Police Department at (562) 570-7244.