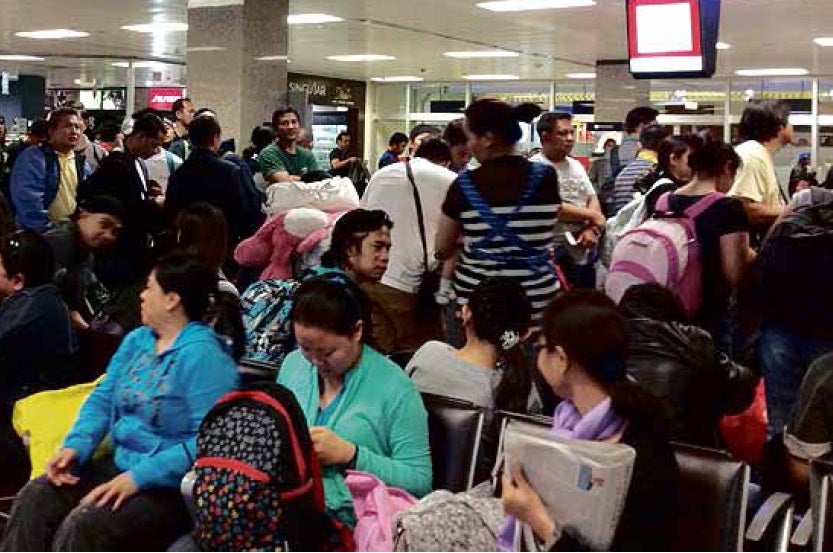 In this August 2014 photo, Filipinos fleeing from Libya wait for their flight to Manila at Malta International Airport after a 28-hour boat ride. The Department of Foreign Affairs has announced that the government’s mandatory repatriation of workers from Libya has been lifted but the deployment ban to the war-torn country is still being enforced. INQUIRER PHOTO

Foreign Secretary Perfecto Yasay Jr. has said the government’s mandatory repatriation of workers from Libya has been lifted but the deployment ban to the war-torn country is still being enforced.

In a statement, Yasay also said Filipino workers with valid and existing contracts were guaranteed that they would be allowed to return to Libya if they so desired.

Yasay approved on Sept. 2 the lowering of crisis alert level in Libya from Level 4, which directs mandatory repatriation or evacuation, to Level 2, which imposes restriction.

The downgrading of the alert level was based on the recommendation of the Department of Foreign Affairs (DFA) security assessment team with regard to the prevailing security situation in Libya after it visited Tripoli from Aug. 9-13.

The Philippines has an existing deployment ban to war-stricken countries such as Libya, Iraq, and Syria since the Arab Spring in 2011.

The DFA Office of the Undersecretary for Migrant Workers Affairs (Oumwa) said at least 23,000 Filipino workers had been repatriated since then, mostly from Libya.

According to a DFA statement, alert level 2 is issued if there are threats to the life, security and property of Filipinos arising from internal disturbances, instability, and/or external threat.

“Under this alert level, Filipinos are instructed to restrict nonessential movements, avoid public places, and prepare for evacuation,” it said.

The Middle East and East African region is host to more than three million of the 10 million migrant Filipino workers, with an estimated 1.2 million in Saudi Arabia alone.

The statement said a total of 5,775 overseas workers from Libya had been repatriated since May 2014.