US told: Don’t lecture us on human rights | Global News

US told: Don’t lecture us on human rights 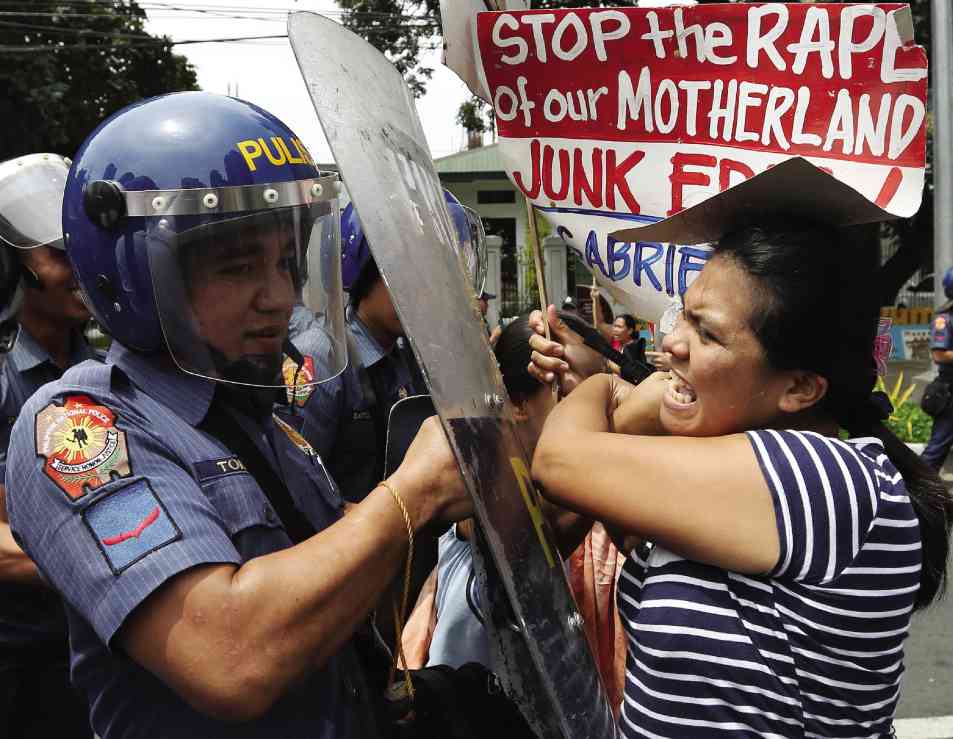 The Philippines is committed to its security alliance with the United States, but objects to being lectured on human rights and being treated like “a little brown brother,” Foreign Secretary Perfecto Yasay said in Washington on Thursday.

Speaking at a security think thank, Yasay insisted that some of President Duterte’s recent remarks had been misunderstood, straining relations with the United States, the country’s main security ally.

He said the President had already explained that his call for the withdrawal of US special forces from Mindanao was only a temporary measure to keep them out of harm’s way while Filipino forces undertook an offensive against Abu Sayyaf bandits holding several foreign hostages.

Mr. Duterte’s opposition to joint maritime patrols with the Americans concerned the Philippines’ “exclusive economic zone,”  and not joint patrols within 22.3 kilometers of its coast, Yasay said.

The joint patrols, aimed at preserving the territorial integrity of the Philippines, “must continue, because this is our commitment to the United States,” Yasay said at the Center for Strategic and International Studies (CSIS) think tank.

“I am asking our American friends, American leaders, to look at our aspirations,” he said. “We cannot forever be the little brown brothers of America …. We have to develop, we have to grow and become the big brother of our own people.

At the same time, Yasay rejected criticism of Mr. Duterte’s war on drugs, in which more than 3,000 had been killed since June. He said Manila would never condone illegal killings, and stressed that bilateral relations should be based on mutual respect.

“You (have to) manage it correctly. You do not go to the Philippines and say ‘I am going to give you something, I am going to help you grow, but this is the checklist you must comply with—

we will lecture you on human rights,’” he said.

Mr. Duterte is “firmly committed to keep and respect alliances, including that with the United States,” Yasay said.

Yasay stressed that the government’s war on drugs does not set aside its commitment to the rule of law.

“The rule of law doctrine fully governs the President’s war on criminality and illegal drugs,” he said, adding that President Duterte is a lawyer who believes in protecting the public from criminals.

“Please bear in mind that the war on drugs encompasses control of demand, reduction of supply (and) sending the guilty to jail to stop their nefarious activities or afford them a chance for rehabilitation so they could go back to the mainstream of society,” Yasay said in his speech.

He said Filipinos value the sanctity of human life since prior to its becoming a US colony, it was at the core of its struggle for independence.

But Yasay did not address testimony in the Senate of confessed hit man Edgar Matobato who on Thursday told a public inquiry that Mr. Duterte issued assassination orders when he was still mayor of Davao City where activists say hundreds of summary executions took place.

Asked to comment on this testimony, a spokesperson for the US Department of State, Anna Richey-Allen, reiterated past comments that it was “deeply concerned” by reports of extrajudicial killings “by or at the behest of government authorities.”

“We strongly urge the Philippines to ensure its law enforcement efforts comply with its human rights obligations,” she said.

In dealing with China, Yasay said Manila was “not at this point in time” prepared to sit down and discuss its territorial disputes bilaterally, given that the two sides differed on what the framework for any such discussions should be.

Mr. Duterte’s abrasive and sometimes contradictory comments, including calling US President Barack Obama a “son of a bitch,” have caused anxiety in Washington, where the Philippines has been seen as an important ally in standing up to China in Asia.

While Mr. Duterte has taken steps to repair relations with China, Yasay also said Manila would only discuss their territorial dispute in the South China Sea with Beijing on the basis of a recent international tribunal ruling, supported by Washington. The tribunal found in Manila’s favor and invalidated the legal basis of China’s expansive claims.

The allies share concerns about China’s pursuit of broad claims in the South China Sea, which overlap with those of Manila and other neighbors.

Washington and Manila agreed earlier this year on joint patrols in the South China Sea and a Pentagon spokesperson said three had been conducted from March until July.

CSIS president and chief executive officer John Hamre clarified that reports on President Duterte’s “cussing and swearing” at Obama was not true.

Hamre said CSIS officer Henry Howard, who is fluent in Cebuano, was present at the Davao City press briefing where President Duterte was widely quoted as having spewed the cuss word. He blamed a “mischaracterization by the press” for blowing the incident out of proportion.

Calling Mr. Duterte “as the President who cussed the President of the United States of America, that’s not a true statement,” Hamre said. With reports from AP/TVJ

Duterte says he snubbed Obama too at Laos meet