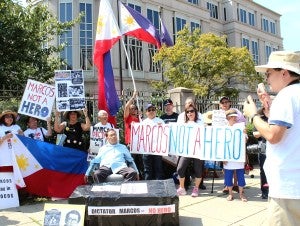 Braving oppressive heat, former anti-Marcos activists and supporters say they are fired-up with outrage over Duterte’s decision to allow a hero’s burial for Marcos. JON MELEGRITO

WASHINGTON, D.C. — Ferdinand Marcos, who ruled as dictator in the Philippines from 1972 until 1986, may have been dead for 27 years but the memory of his brutal rule is still very much alive.

“In life and in death, Marcos still wanted to divide and rule the country,” said Jun Cristobal of Washington, D.C. in a Facebook post.

While others with similar sentiments weighed in on social media, about 25 former anti-Marcos activists braved 92-degree temperatures to stage a small but raucous protest rally last Wednesday in front of the Philippine Embassy. 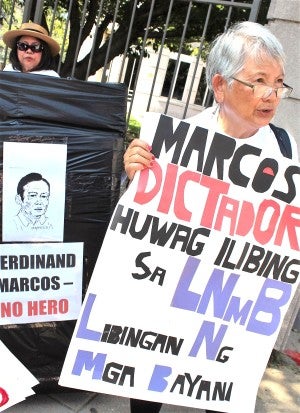 Dolly Pascual, a former anti-Marcos activist, expresses her opposition to a heroes burial for Marcos during the rally. JON MELEGRITO

“No way are we going to let this tyrant desecrate a hallowed ground where heroes and martyrs are buried and honored for their patriotism and noble service to their country,” he said. “Marcos is a criminal, not a hero.”

Wheelchair-bound and ailing, the 83-year-old retired politician recalls holding a bullhorn at a street corner near the old Philippine Embassy on Massachusetts Avenue more than 30 years ago, railing at Marcos for his crimes of “gross plunder and mass murder.”

“I’m back here again, in front of the embassy,” he says. “Although my family advised me not to come because of excessive heat, I want to be here to let the President know how I feel.”

Shortly after his election, Duterte acceded to demands of a hero’s burial by the Marcos family. The Philippine Supreme Court, however, issued a restraining order  – now extended to Oct. 18 – delaying the planned burial until the court decides on the legality of Duterte’s controversial action.

The noontime rally, part of a nationally coordinated action, was organized by US Pinoys for Good Governance (USPGG), the Coalition Against the Marcos Dictatorship and the Movement for Free Philippines (MFP). CAMD and MFP led the opposition to the martial law regime in the 70s and 80s. 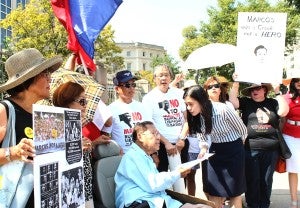 A letter addressed to Duterte and signed by the organizers and various individuals, was personally handed to Darrel Artates, the Philippine Embassy’s Minister of Public Diplomacy.

The letter reads in part: “Burying Ferdinand E. Marcos alongside our nation’s heroes who fought for our freedom is an affront to the thousands of lives tortured and murdered during his reign. A hero does not take away freedom, he campaigns for it and fights for its survival for the sake of others. Laying him to rest at the Heroes’ Cemetery is a disdainful act that will send a message to the future of our nation – our children – that the world we live in rewards forceful and violent hands.”

Artates assured the protesters that the letter will be delivered to the President.

During the hour-long demonstration, protesters chanted “No Heroes Burial for Dictator Marcos.” They waved signs that read “Marcos was a crook, not a hero” and “Marcos stay in Ilocos.”

They also displayed a mock coffin to symbolize the thousands who died under martial law, and several black and white pictures of Marcos victims, including activist Emilio Javier and political prisoner Ninoy Aquino.

“Marcos does not belong in a cemetery where heroes and martyrs are buried,” said Eric Lachica of USPGG, who led the rally. “He should be laid to rest in Batac, Ilocos Norte.” 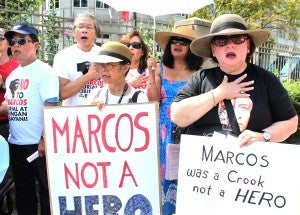 Protesters sing the Philippine National Anthem at the conclusion of their protest action. JON MELEGRITO

Maurese Oteyza Owens of Arlington, Virginia and an active MFP member during the martial law years, explained why it’s important to speak out, in light of Marcos loyalists’ claims that he deserves a heroes burial because he was a soldier and president: “We can’t be quiet. We must make noise about what Marcos did so people won’t forget.”

Speaking on behalf of MFP members, many of whom were refugees from the Marcos dictatorship – including the family of MFP Founder Raul S. Manglapus – Owens cited the Marcos regime’s human rights violations and atrocities, his fake medals and his plunder of the nation’s coffers. “Because he was ousted from office by a sovereign act of the people, Marcos is clearly disqualified from being buried in the LNMB.”

Adds Wally Reyes of Arlington, Va. and a former MFP member: “If the greatest thief gets buried in the LNMB, then future generations will not understand the difference between heroes and thieves.”

At the end of the rally, the protesters led by USPGG member Bambi Lorica sang “Bayang Magiliw” (the Philippine National Anthem).

They vowed to continue their campaign next Friday when Secretary of Foreign Affairs Perfecto R.. Yasay, Jr. addresses the Filipino American community at a Talakayan (open forum) hosted by the Philippine Embassy. “We plan to appeal to the Secretary to urge President Duterte to reconsider his unwise decision,” Lachica said.

Read Next
SF non-profit still sending poor PH kids to school after 30 years
EDITORS' PICK
DOH says COVID-19 cases plateauing, but public shouldn’t be ‘complacent’
Look Through: The fate of impounded stray dogs
House energy committee chair Arroyo bats for cheap electricity
23,000 cops to be deployed nationwide for school reopening
Unleash the photographer in you this World Photography Day with vivo smartphones
What to watch out for when selecting a video surveillance solution
MOST READ
Sharon Cuneta asks for prayers for friend in ICU who suffered silent stroke
Light therapy could be the answer to your sleep problems
Korina Sanchez reunites with former ABS-CBN co-anchors Julius Babao, Cheryl Cosim
Solons file resolutions seeking probe on ABS-CBN, TV5 merger
Don't miss out on the latest news and information.

TAGS: Coalition Against the Marcos Dictatorship, David Valderrama, Movement for a Free Philippines, Philippine Embassy US, protest against hero’s burial for Marcos, US Pinoys for Good Governance (USPGG)