Big protest in San Francisco: No hero’s burial for Marcos

More than a hundred Filipino Americans in San Francisco took time off from work to voice their opposition to a hero’s burial for Ferdinand Marcos. WALTER YONN

SAN FRANCISCO – More than a hundred protesters crowded in front of the Philippine Consulate here at noon Wednesday, Sept. 7, responding to a call for “global demonstrations” against Philippine President Rodrigo Duterte’s decision to bury Ferdinand Marcos in the nation’s Heroes’ Cemetery.

The protest was likely the largest among the demonstrations that took place in New York, Washington, DC, Seattle, Chicago, Los Angeles, the Marianas and European cities.

Conchita Lopez-Taylor widow of Eugenio Lopez Jr., who was imprisoned after Martial Law was declared and escaped from prison with Serge Osmeña in 1977, said, “I don’t believe that Marcos is a hero and should be buried in the Libingan ng mga Bayani.

Conchita Lopez-Taylor’s late husband, Eugenio Lopez Jr. was jailed by Marcos for five years before he was able to escape and flee to the US. JUN NUCUM

“My husband Eugenio Lopez Jr. was jailed for five years. It was very difficult to be put to jail without any charges and in indeterminate time at that. The first he was taken into custody, we didn’t have any idea of what was going on. He was at his Meralco office when they approached him to come with them to ask a few questions and he just never came home. They were very difficult years.”

Passerby Matthew Payton, a new US resident originally from the UK said, “I was walking down the street when I saw the demonstration against Marcos against the burial that I already heard about in the news. I know enough that this is important, that this grievance against the burial of Marcos in the heroes’ cemetery is very real and appropriate.”

Filipino American demonstrator Melinda Paras was imprisoned and then deported by the Marcos government. She was a student member of Kabataang Makabayan who went into hiding “because everyone was being rounded up.” 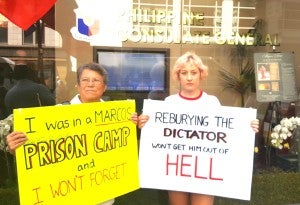 Fil-Am Melinda Paras,with daughter, Lorena, was jailed in military prison and then deported to the US. JUN NUCUM

Her grandfather was Chief Justice of the Supreme Court Ricardo Paras. “I visited my grandfather’s house in Paco, Manila, which turned out to be a mistake for they were waiting for me there, operatives from the Philippine Constabulary and Armed Forces of the Philippines. They took me to Camp Aguinaldo then to Camp Crame. I was in jail for about two months and with the intervention of some American senators I was deported back to the United States.”

Paras grew up in Wisconsin with a Filipino father. “Marcos did horrible crimes to eliminate opposition and democracy. I know that democracy is somewhat flawed but still when you had no opposition, no newspapers and no one can oppose you, it was horrible dictatorship and he should rot in hell.” 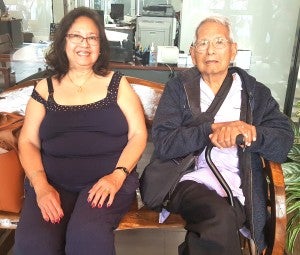 Carmen Abellera and her father were just visiting the Philippine Consulate and chanced upon the protest. She agrees with the protesters that Marcos should not be buried as a hero. JUN NUCUM

After being deported, Paras helped found Katipunan ng Mga Demokratikong Pilipino or KDP (Union of Democratic Filipinos). “I was a leader for many years. When we deposed him, we thought we are going to have democracy again. But it is looking very shaky now. I would like to say that I won’t forget and I hope the Filipino people won’t forget either,” she said.

Paras came to the protest with her daughter, Lorena, 16, who said, “It was really empowering to learn that my mom was such a strong woman having been through all of these and survived. I was actually named after Lorena Barros who was her friend. Lorena was the head of MAKIBAKA [Malayang Kilusan ng Bagong Kababaihan) who joined the New People’s Army and died fighting.”

From the North but not pro-Marcos

Carmen Abellera of La Union province but now resides in Pacifica, California, was just visiting the consulate with her father. “It is okay for me to see them holding a rally for they are just voicing out what they feel and have in mind. After what he did after declaring Martial law and accumulated all these properties and unexplained wealth, and there were some people that were still not given justice even after, these are the things that come to mind about Marcos,” she stated.

“That is why I am not in favor of burying him in the LNMB. Even though I come from Northern Philippines touted to be solidly behind Marcos, I am not a regionalistic person. Since I have already been here in the U.S. for 42 years, I came to learn that it doesn’t matter where you came from. You have to distinguish what is right from wrong,” she went on.

“I want them to bury him in his hometown in Batac Ilocos Norte. I was in Hawaii in 1991 and went to see his remains. That was too long ago and I think it is about time that they finally give him rest,” Abellera concluded.”

Millennial Patrick Racela, 24, a member Pilipino American Collegiate Endeavor of San Francisco State University, was born in Walnut Creek, California, but had been to the Philippines three times.

“When I was in high school, I had a lot of reports and one thing I did a report on the Philippines. I found out of the People Power uprising in 1986 and the historical background of how it came to be with Marcos declaring Martial law, that was how I initially learned of the Marcos dictatorship,” Racela recalled. 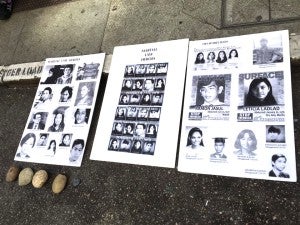 Protesters displayed photos of some of the victims of martial law, who were “disappeared” or found murdered after being picked up by the military. JUN NUCUM

“I would hear a lot of stories from my grandparents, and they were supporters of Marcos too. But doing my independent research and getting to understand by having a moral perspective that even though he built bridges and constructed roads, it does not erase the fact that he was responsible for committing various human rights violations against innocent people.”

He said further: “I was shocked to learn that he was going to be buried at the Libingan ng mga Bayani. We are witnessing a whitewashing of Philippine history and particularly for us as Filipino American, it is already hard enough because we can barely have our own history taught in school. What should be done is the proper education to teach the youth and students to help them understand that Marcos was a dictator who was responsible for grave human rights violations.”

World War II veteran Leonardo Torres said in Tagalog, “Marcos should not be buried in the Heroes’ Cemetery because as far as we know in Laguna he was not a real veteran, he just joined in when Gen. MacArthur came back. Yes, he should be buried, but not at the Libingan ng mga Bayani.”

Isabella Avila Borgeson says her mom was also demonstrating in front of the Philippine Supreme Court in Manila, which is hearing arguments over President Rodrigo Duterte’s decision to bury Ferdinand Marcos at the national Heroes’ Cemetery. JUN NUCUM

“The order of President Duterte to have Marcos buried at the Libingan ng mga Bayani paints a very bad image of Filipinos around the world,” said lawyer and anti-Marcos activist Ted Laguatan. “The interest of the Filipino people is foremost in our minds. Not the interest of President Duterte or the Marcoses. To create and impose the fiction that Marcos, who is known all over as a shameless dictator is a hero, is a lie. You cannot carry on with a lie.”

Laguatan added: “Marcos was never a hero even in the military records in Washington. DC. All accounts that he was a hero were all fiction. Even his medals were fake. And this not a healing process if you are imposing among your countrymen lies. It is even a divisive hurting process far from being a healing process.”

Meanwhile, former Philippine Air Force staff sergeant Ricky Sindayen, now based in Oregon, said he was assigned to the Presidential Security Command in Tarlac as part of security for of Ferdinand, Bongbong, Imelda and Imee since 1966. He claimed to have escorted the remains of Ferdinand Marcos from Hawaii to Guam before landing in Laoag. Sindayen was in the Philippine consulate to extend his expired passport when he chanced upon the rally. He was scheduled to fly back to the Philippines. 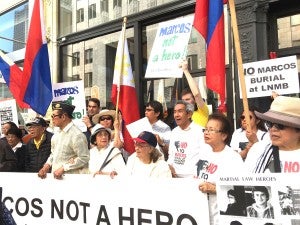 “I was happy that President Duterte decided to bury President Marcos because he (Duterte) was just following the law, regardless of whether Marcos was a hero or not, as long as the one being considered was a soldier. It is time for him to rest in peace,” Sindayen contended.

“It is all right for them to protest and stage a rally against the burial of President Marcos in the Libingan ng mga Bayani. Everybody has rights and each has his own belief. We may not agree every time on issues even among families, but it good to agree to disagree,” Sindayen said.

Read Next
Duterte, Widodo agree on case of Indonesians with PH passports
EDITORS' PICK
Legarda emphasizes role of ICC/IPs in nation building this IP month
Work-From-Home is here to stay and requires reliable logistics
PH still at bottom of COVID-19 economic resilience ranking
TNT nears PBA crown after rout of Magnolia in Game 4
Renewal of driver’s license now requires taking LTO education seminar
Climate Change Commission and Nestlé PH to discover sustainability-focused solutions
MOST READ
Drivers now required to take driver’s education upon license renewal – LTO
Marcos Jr’s ‘special diploma’ from Oxford: You can have it, too
OVP spox to Imee Marcos: Robredo is an extraordinary lawyer
Don’t do that: Robredo to supporters calling to boycott restos supportive of Marcos
Don't miss out on the latest news and information.