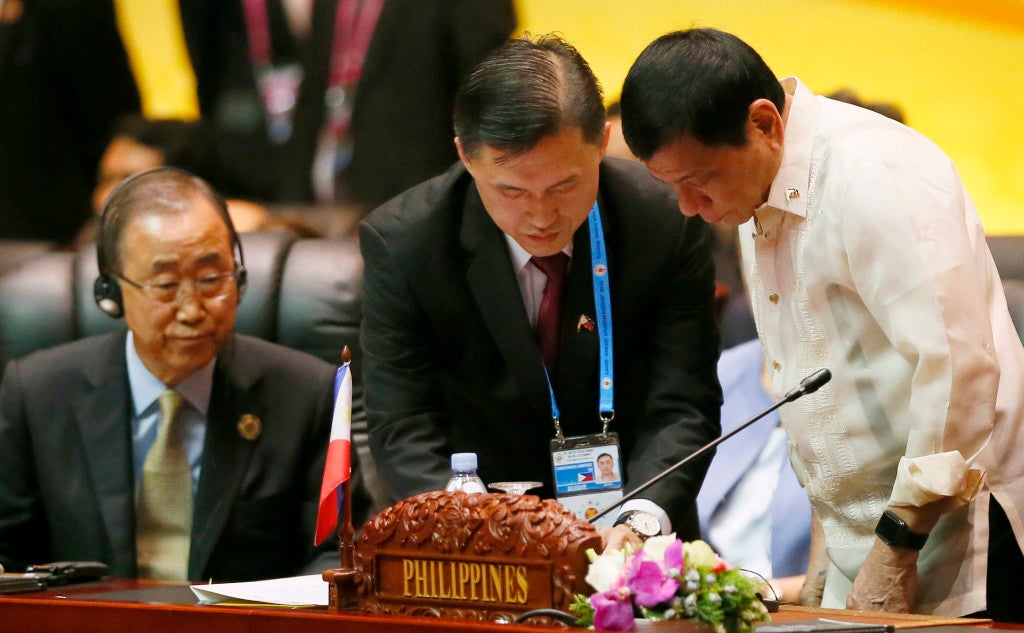 UN Secretary General Ban Ki-moon on Thursday urged Association of Southeast Asian Nations (Asean) member states to ratify the Paris Agreement on Climate Change within the year to bring it closer to force.

Speaking at the Asean-UN Summit in Vientiane, Laos, Ban said that of the 10 Asean members, only Laos had ratified the Paris Agreement which relates mainly to efforts to reduce global greenhouse gas (GHG) emissions and mitigate a disastrous rise in world temperatures in the coming years.

The Philippines was represented at the meeting by Foreign Secretary Perfecto Yasay Jr. in place of President Duterte. It was one of the mini summits taking place around the main Asean summit.

Aside from the Philippines and Laos, the Asean includes Indonesia, Thailand, Malaysia, Singapore, Brunei, Cambodia, Myanmar and Vietnam.

So far, 27 countries—together responsible for about 39 percent of global GHG emissions—have ratified the Paris Agreement.

“We need 28 more countries to ratify, accounting for a further 16 percent of greenhouse gas emissions, to bring this agreement into force,” Ban said in his opening remarks.

“If nine more Asean countries ratify, we will have just 19 more countries to go. I am counting on your leadership,” he told the assembled heads of state and government.

Ban said he was convening a special summit on Sept. 21 at UN headquarters in New York to accelerate the ratification process.

The UN in a statement said Ban emphasized the Paris Agreement was founded on respect for human rights and democracy.

“We must now explore ways to mainstream human rights across all areas of the Asean-UN partnership,” Ban said.

The Philippines signed the Paris Agreement during the Aquino administration but ratification by Congress has yet to be completed. Mr. Duterte however on July 18 said his administration will not honor the agreement.

Mr. Duterte called the agreement “stupid,” saying it would stymie the country’s growth and industrialization.