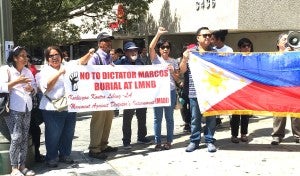 LOS ANGELES – Former anti-Marcos activists came out at lunchbreak from their day jobs or retirements Sept. 7 to join the international protest rally against the planned burial of Ferdinand Marcos at Libingan ng mga Bayani (Heroes’ Cemetery) in Manila.

A crowd of old and young protesters held picket signs in front of the Philippine Consulate General on Wilshire Blvd.

Among the organizations represented in the protest were MAKIBAKA, FASGI, Knights of Rizal,  KmB Pro People Youth,  Pilipino Workers’ Center, and former members of the Coalitiona Against the Marcos Dictatorship, National Committee for the Restoration of Civil Liberties in the Philippines and Katipunan ng Demokratikong Pilipino. 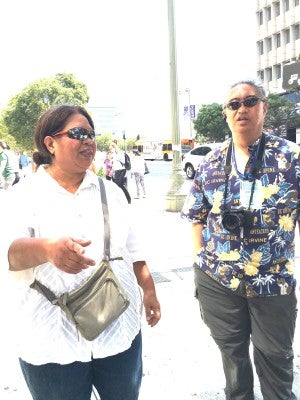 Carol Ojeda Kimbrough, whose first husband, Rolando Federis, was arrested and murdered by the Philippine military; seen with her at the LA protest is Florante Ibanez, a former anti-martial law activist. CECILE C. OCHOA

Tess Mercado, 60, joined the global “Kontra Libing” protests to let the world know that Marcos’ repressive regime was a fact of Philippine history. “My family and I were apprehended and jailed in Daur, Nueva Ecija because we were accused of being subversives–my husband, myself two months pregnant and my little son who was one and a half.”

Lillian Tamoria came to the rally because she fears repression returning to the Philippines. “I grew up in the U.S. and in the ‘70s I demonstrated against curtailment of civil rights in the Philippines. I fear the same repression during Martial Law will happen again.

“As an American, I have to show my outrage about this disregard for such atrocities by honoring Marcos as a hero,” Tamoria concluded.

Enrique dela Cruz, Carol Ojeda-Kimbrough and Florante Ibanez were leading the anti-Martial Law movement in Los Angeles some 40 years ago. They shared the celebratory champagne of victory when martial law was formally lifted on January 17, 1981. Four years thereafter, they they celebrated Marcos’ exit to Hawaii where he stayed until his death in 1989. 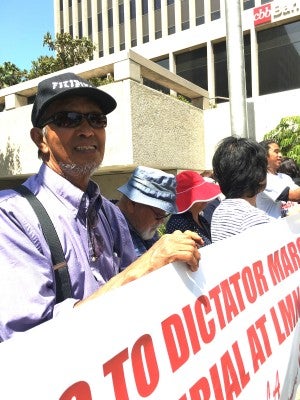 Enrique, Carol and Florante since then have taken professorial jobs in different state colleges and universities that offer Asian and Philippine American studies.  They found that the best way to remember the era of repression and civil rights violations in the Philippines was to teach about it in schools and write about it.

A professor at the Pasadena City College and formerly at the Loyola Marymount university, Florante Ibanez lamented that most of the students are not aware about the Philippines’ martial law era and the abuses suffered by Filipinos in the hands of the military at the time.

“I’m here in this protest rally today because I feel strongly that Marcos doesn’t deserve to be buried in a place of honor; he was a dictator!” said Ibanez who also works fulltime managing the computer science services of the Loyola Law School library. He was appointed by Gov. Jerry Brown to a four-year term on the California Library Services Board in 2014.

“It’s sad that many of our youth have not heard of the tortures, repressions and civil rights violations during that time.   Their parents seemed to have lost memory of that era,” he added

“I really don’t blame Bongbong Marcos for wanting to bury his father in the Libingan ng mga Bayani, but Duterte must have received a ‘down payment’ that he used during the last Philippines’ elections for his campaigns,” the well-known author said.

“I was very active about 20 years ago in Philippine politics and issues and now I expect the younger generation to bear placards and protests on this issue.   I was just staying out of trouble at retirement but I had no choice but come out in the streets again to protest again,” he said. 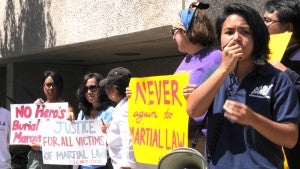 Nikole Cababa, deputy secretary general of BAYAN USA and member of the International Coalition for Human Rights in the Philippines, at the Sept. 6 protest. HIYASMIN SATURAY

Prior to coming to CSUN, he served as the assistant director of the UCLA Asian American Studies Center, where he was instrumental in the development of the B.A. degree program in Asian American Studies. He is co-author of the “Forbidden Book: The Philippine American War in Political Cartoons,” which is a collection of political cartoons from 1898-1907.

Carol Ojeda Kimbrough, recently retired from teaching cultural history at Cal State Fullerton and earlier from University of Southern California. In the 1980s she had enjoyed a corporate job at one of the largest oil companies in the U.S. until she decided to quit and pursue her doctorate studies.

Close to that decade in 1976, while she was in the U.S., Carol received the devastating news via phone that her first husband, Rolando Federis, a young activist fighting against Marcos’ martial law was abducted on his way to organizing in Bicol.

In 1986, Carol met Adora Faye De Vera, who survived the abduction but not before suffering from daily physical torture and rape in the hands of her captors. She lived after the head of the military operations took interest in her while Carol’s husband and another activist, Flora Coronacion, were killed.

Carol, along with Florante campaigned for the restoration of civil rights back home with others from the Coalition Against the Marcos Dictatorship. Enrique together with his wife, Prosy, a retired regional director of a large regulation agency and now a community journalist, led the LA chapter of the National Committee for the Restoration of Civil Liberties in the Philippines (NCRCLP). 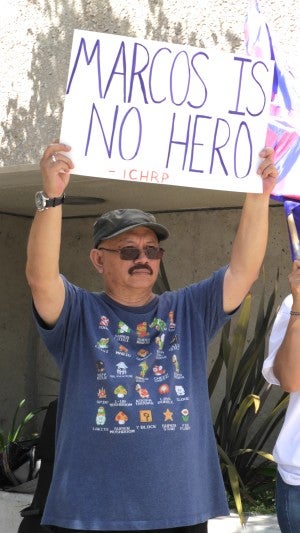 “There is a deeper context to this rally and our point is that Marcos was no hero,” expounds Kimbrough. The tens of thousands of individuals and families who suffered under his regime are clamoring for moral redemption–that’s a whole generation!”

Represented by Philadelphia attorney Robert A. Swift, Kimbrough said their lawsuit was settled in 2011 “which awarded me a check for $1,000 – is that the value of the life of a Filipino?”

In a 1991 news report the Los Angeles Times ran the lead plaintiff in this lawsuit “is the mother of Liliosa Hilao, a Filipino student leader who, according to court documents, was illegally arrested, raped by seven soldiers and tortured to death in Manila in 1973. Philippine military officials contend Hilao committed suicide by drinking acid”.

“When you accord him a hero’s burial, where is the remorse for these atrocities? asked Kimbrough.

Lolita Andrada Lledo survived incarceration after joining the underground movement in the 1980s as she organized workers against human rights violations in the Philippines. “We were the lost generation, after we offered our lives for freedom from suppression,” she said

After being released from a military prison and finding no income opportunities for her, Lledo immigrated to this country and now works for the Pilipino Workers Center in LA. She’s now engaged in assisting caregivers learn and assert their rights as workers, most of whom were part of the EDSA revolution.

Myrla Baldonado, who works with Lledo, remembers participating in various protests about the presence of the U.S. military bases in Olongapo as championed by Marcos.   In 1983 she was arrested for subversion and after being accused of keeping weapons which “were planted” on her during the arrest. She spent three years in prison in Olongapo, during which she alleged there was “an attempt to ask the Philippine government for her extradition to the U.S.”

She said she was subjected to physical and mental torture in prison and was sexually molested. “Twenty years after that harrowing experience, I had to seek rehabilitation counseling because I couldn’t escape its psychological impact.”

At 63, Baldonado has stayed unmarried but has adopted three children in the Philippines. “I’m waiting for the results of the other class action lawsuit that some 45,000 of us have filed against Marcos.”

Speakers at the rally took turns disputing claims that Marcos was a hero and recounting the human rights abuses under his 21-year rule.

“Allowing for a hero’s burial does more than disrespect these thousands of victims,” said Joy Prim of the International Coalition for Human Rights in the Philippines. “It deletes their suffering and these injustices from history.”

Rudy Liporada, who was arrested and tortured during the Marcos dictatorship recalled his harrowing experience.

“If not for a reporter who splashed my name in the mass media in the Philippines when I was captured, I might have also disappeared,” he said. “My parents and my wife would not have known that I was captured.”

Fr. Toting Tronco of the National Ecumenical Forum for Filipino Concerns said Church leaders and workers were not spared. 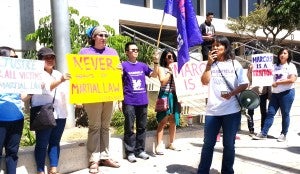 Terrie Cervas, secretary general of Gabriela USA and member of local affiliate Gabriela Los Angeles shares the story of Lilosa Hilao, a scholar and journalist, and widely known as the first Filipina martyr of Martial Law under the Marcos dictatorship. HIYASMIN SATURAY

“One year later, a grenade was thrown into a temporary house where I lived. I survived the burning of a house, I survived a live grenade, I don’t know in my old age now if I can survive to see that a dictator is being buried in a heroes’ cemetery.”

Dominico Vega of Anakbayan Los Angeles said Marcos “systematically darkened” the future of the Filipino people during his administration by allowing corruption, landlessness and foreign domination to thrive in the Philippines.

“Prim” added that human right violations continue under the Duterte administration. “To this day, activists continue to be persecuted because of their work. Even innocent people accused of being involved in illegal drugs are summarily killed,” she said.

The rally was part of Bayan USA’s National Days of Action, with other rallies held in San Francisco, New York and Seattle.

Read Next
Subic fishermen confirm new Chinese ships at Scarborough
EDITORS' PICK
DILG to stranded workers: ‘Stay where you are’ until Luzon-wide quarantine is over
BREAKING: 1,075 people in PH has coronavirus disease – DOH
Style and music journeys with Claudia Barretto
UP-PGH wards for COVID-19 patients finished in 5 days
IATF: Food firms to operate with 50% of workforce during Luzon quarantine
Cebu City closes its borders
MOST READ
Pacquiao to seek probe on leaked private letter from Barangay Dasmariñas
Tootsy Angara bares neighbor wanted them out of village
All 3 COVID-19 positive patients in Bicol sent home
BREAKING: 1,075 people in PH have coronavirus disease – DOH
Don't miss out on the latest news and information.