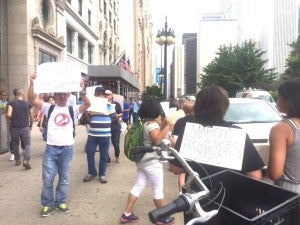 CHICAGO—Officer workers on lunch break at this city’s busy “Magnificent Mile” were puzzled by the demand of some 20 picketers to prevent the burial of the late Philippine strongman, Ferdinand E. Marcos, at the “Libingan ng mga Bayani, during the Sept. 7 demonstration in front the Philippine Consular offices at 122 S. Michigan Ave.

Brian, a Caucasian married to a Filipina, stopped and asked, “Isn’t this guy murdered early 1980s? He is not buried yet? He was told that Marcos died of natural causes in 1988 while in exile in Hawaii and that his body was brought home in the early 1990s on the condition that he would be interred in his home province of Ilocos Norte.

A young student asked who would want to bury a dictator in a Heroes’ Cemetery, when informed that the “Libingan” is the Filipinos’ equivalent of the Arlington Cemetery in Virginia. “Your new president!?–Same one who cursed Obama?” said he, when told who wanted Marcos reinterred in a hero’s plot.

“What’s his name again?” The curious student got through the obvious absence of President Duterte’s name on the picket signs and the leaflet that was being passed around to bystanders and the passing pedestrians. 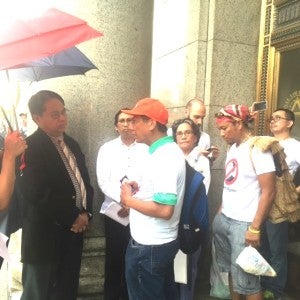 Consul General Generoso Calonge (left, in dark suit) hears Sept. 7 the demand of picketers led by Jerry Clarito (in red cap) and Nita Salvador Burris who asked not to give Marcos a hero burial. PINOY NEWSMAGAZINE

A further investigation revealed that the demonstrators were not with the same group that was enjoined by the national committee led by businesswoman, Loida Nicholas-Lewis, and San Francisco lawyer, Rodel Rodis, to join U.S.-wide demonstrations to protest the order of President Duterte to accommodate the wishes of the family of the late dictator to transfer the remains of Marcos to “Libingan ng mga Bayani’ and to grant him the attendant rites worthy of a war hero.

Amidst a sudden downpour near the entrance of the consulate building, several top consular officials led by Consul General Generoso Calonge spoke to some of the protesters, who politely reminded the area’s head Filipino diplomat that Duterte leans to the left and that he should heed the example of his mother who reportedly fought the excesses of the Marcos regime–to reconsider the hero’s burial for Marcos.

The dialogue, however, did not touch on the recent truce worked out between the Duterte regime and the National Democratic Front (NDF) and the representative of CPP leaders-in-exile abroad.

ConGen Calonge even invited the demonstrators to join him at the consular offices on the 16th floor of the building, but he was vehemently overruled by the building’s security officers. Due to the heavy rain, the tame and small picket signs were soon collected and stashed away but one that did not escape notice that “Duterte” was nowhere printed on their signs and leaflets.

One prominent picketer made it clear that this group was not a “yellow crowd.” “I am known to be a Duterte supporter,” he repeated at least three times. Various reporters including those from NPR Radio, Rappler , INQUIRER.net and local community newspapers covered the hour-long event.

So to whom exactly did these protesters address their demands?