Obama puts sea row back on agenda of Laos summit 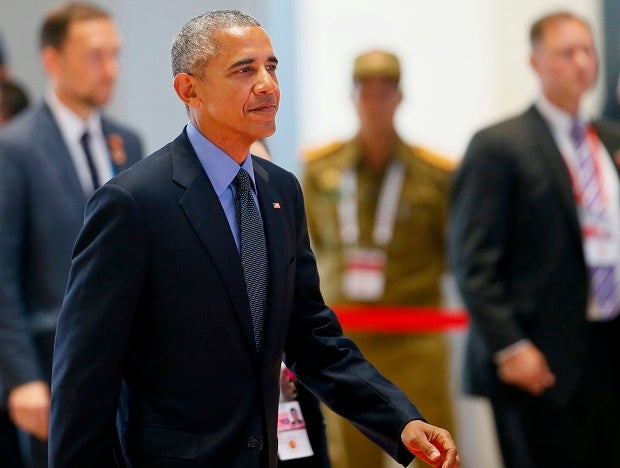 US President Barack Obama walks to his meeting with ASEAN leaders in the ongoing 28th and 29th ASEAN Summits at the National Convention Center, Thursday, Sept. 8, 2016 in Vientiane, Laos. AP

VIENTIANE, Laos—US President Barack Obama put the long-simmering dispute in the South China Sea front and center on the agenda at a regional summit on Thursday as it became clear that most of the other leaders gathered in the Laotian capital were going to let China off with a mild rebuke over its territorial expansion in the resource-rich waters.

“We will continue to work to ensure that disputes are resolved peacefully, including in the South China Sea,” Obama said in his opening remarks at a meeting with leaders of the 10-member Association of Southeast Asian Nations (Asean).

He said an international arbitration ruling on July 12 against China was “binding” and “helped to clarify maritime rights in the region.”

Asean was to hold a separate summit later Thursday with other world powers, including China and the United States.

At the close of its summit, Asean issued a joint statement letting China off with a muted reprimand over its expansionist activities in the South China Sea.

The mild language in the statement, despite growing frustrations in the region over China’s claims, is a reflection of Beijing’s diplomatic, economic and military clout within Asean, which forms the core of the East Asia Summit that also includes the United States, China, Russia, India, Japan, South Korea, Australia and New Zealand.

The United States has repeatedly expressed concern over China’s actions in the resource-rich sea. Obama brought that up again.

Referring to the arbitration panel’s ruling that invalidated China’s claims, Obama said: “I realize this raises tensions but I also look forward to discussing how we can constructively move forward together to lower tensions and promote diplomacy and regional stability.”

China went to great lengths to block any references in the statement to land reclamation, militarization or loss of trust, lobbying for the document to avoid mention of recent activities or the need to respect legal processes, according to a senior Obama administration official.

Though China recently announced a $600-million aid package to ally Cambodia, Beijing was unable to get Phnom Penh to block the statement, said the official, who requested anonymity.

Instead, Cambodia opposed including an explicit mention of the UN-backed tribunal’s ruling, the official said.

The six-page, 28-point declaration devoted one paragraph to the South China Sea.

“We reaffirmed the importance of maintaining peace, stability and security and freedom of navigation in and overflight in the South China Sea,” the statement said.

“Several leaders remained seriously concerned over recent developments in the South China Sea … We stressed the importance for the parties concerned to resolve their disputes by peaceful means, in accordance with universally recognized principles of international laws,” it said.

The statement made no reference to the land reclamation by China, which has turned shoals and coral reefs into seven artificial islands and built airstrips capable of handling military aircraft on three of them.

The July 12 ruling by the Permanent Court of Arbitration in The Hague said China’s claims to almost all of the South China Sea had no legal basis, and that it had violated the Philippines’ rights to fish and explore for minerals in its exclusive economic zone in the sea.

It also ruled that a massive burst of artificial island building by China to bolster its claims in the South China Sea was illegal.

China angrily vowed to ignore the ruling, describing it as “waste paper,” even though it had legal force through the United Nations Convention on the Law of the Sea.

Asean leaders at their earlier summit on Tuesday expressed concern over China’s island-building.

The Asean leaders had also said that their summit “took note of the concerns expressed by some leaders on the land reclamations and escalation of activities in the area, which have eroded trust and confidence, increased tensions and may undermine peace, security and stability in the region.”

The use of the phrase “some leaders” in the two statements underscores the fundamental problem Asean and the wider East Asia Summit has in dealing with China—not all its members are willing to scold Beijing.

Cambodia, for example, remains firmly in China’s camp, as is Laos to a large extent, preventing any robust statement from the consensus-bound Asean group.

Officials said that talks on Wednesday between the Asean leaders and Chinese Premier Li Keqiang had gone smoothly.

But in a statement later from China’s foreign ministry, Li was paraphrased as saying China was willing to work with Southeast Asian countries in “dispelling interference . . . and properly handling the South China Sea issue.”

He did not elaborate, but such wording is typically used by Chinese leaders to refer to not allowing countries from outside the region with no direct involvement in the dispute, like the United States, from getting involved.

The issue of ownership of territories in the South China Sea has come to dominate Asean summits in recent years. China claims virtually the entire sea as its own, citing historical reasons.

That has pitted it against the Philippines, Vietnam, Malaysia and Brunei—all members of Asean—which have overlapping claims in the South China Sea.

On Wednesday, the Philippines released what it says are surveillance pictures of Chinese Coast Guard ships and barges at the disputed Scarborough  Shoal, an apparent attempt to publicize its concerns before Asean leaders met with Li.

The Philippines is concerned that China may plan to turn the shoal, known to Filipinos as Panatag Shoal, into another artificial island despite the Hague court’s ruling that it is a fishing ground for all.

But Chinese foreign ministry spokesperson Hua Chunying said China had not done anything to alter the circumstances surrounding the shoal.

“What I can tell you is that the situation in waters near Huangyan Island remains unchanged and China hasn’t made any new moves,” Hua said in Beijing, using the shoal’s Chinese name.

“We should be highly alert against the mischief-making intentions of people who spread such groundless information in such situations,” he added.

The Chinese Embassy in Manila said there had been no dredging or building at Panatag Shoal and China had maintained a Coast Guard presence there for law enforcement patrols.

President Duterte has taken a more conciliatory approach to China than his predecessor, and has said he would not raise the dispute in an adversarial manner that might upset Beijing.

The US military has also expressed concern over the possibility that China might turn Panatag into another island, something that would give Beijing’s forces greater control over a swath of the South China Sea used as a passageway to the Taiwan Strait. Reports from AP, AFP/TVJ

US official defends China over PH claim of new island-building