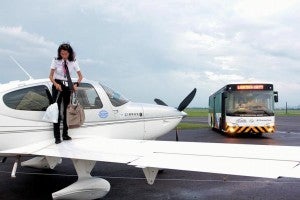 BAGUIO CITY —  Flight instructor Julie Wang has landed at the Clark International Airport in Pampanga province, one of her stops as she attempts to fly around the world on her Cirrus Generation Three single-engine aircraft.

Wang’s plane landed on Wednesday after a 10-hour flight from Guam and flew out at noon on Thursday for China without much fanfare.

A resident of Florida in the US, Wang intends to become the first Chinese woman to circumnavigate the world on a single-engine plane.

A Clark International Airport Corp. (CIAC) report said Wang’s journey, which has been promoted by the Aircraft Owners and Pilots Association (AOPA) in China, would cover 23,000 nautical miles, mostly over oceans.

Wang grew up in Dalian, China, but she has been a Florida resident for the past six years.  SFM