The dogs of war 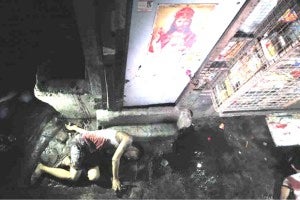 NEW YORK CITY—They don’t care if the law is disregarded, stomped upon, and tossed aside like some broken object. Human rights be damned!

When corpses appear with disturbing regularity in the streets, they consider these, with a hint of a sigh, as “collateral damage.” The unexpressed sentiment is, too bad for these folks, but you can’t have an omelet without breaking eggs, can you now?

They take at their word cops’ allegations, or that of vigilantes, that the heretofore living, breathing individuals now lifeless in the gutter, were indeed guilty of being active in the drug trade. And who’s to prove them wrong? The dead cannot speak on their own behalf, cannot point to the absurdity of it all: that the police whom the upstanding gentlemen—and they are all upstanding gentlemen—once raked over the coals not too long ago for their less than sterling character are now being elevated to the status of saviors.

Not since Saul’s conversion on the road to Damascus has there been such a miraculous transformation. Why, these men have overnight become crusaders for justice, sinners turned saints, with halos where there were once horns! A miracle for our times!

The prevailing sentiment among these educated gentlemen—and they are all educated gentlemen—is, Break all the (metaphorical) eggs, as long as this isn’t done in our backyard, as long as the demarcation between the great unwashed—who constitute the overwhelming majority of those gunned down—and the perfumed, neatly and expensively dressed pashas is maintained. Blatant violation of civil rights? No problem, as long as theirs are respected.

Still, some of these pashas may feel twinges of discomfort, indicative that their sense of compassion hasn’t quite died out. To appease these twinges, the more pragmatic among them will counsel their peers to just think of the dead as inhuman. They may even revert to the cliché that the dead were mad dogs. And how do you deal with mad dogs? Silly question. Shoot them, of course!

Behind this interpretation lies a hallowed tradition, and I commend our honorable gentlemen—and they are all honorable—for their surefooted grasp of history. They could be emulating the Nazis who were masters in this regard, painting Jews as filthy beasts, criminals of cunning, beyond the pale, whom the superior race should have no qualms in getting rid of.

Or they could be thinking of how the American bluecoats, during the Philippine-American War of 1899, fervently believed that the Filipino revolutionary soldiers were “monkeys without tails,” “savages,” “googoos,” in other words, inhuman.

Or perhaps the model for these cultured gentlemen—and they are all cultured—is the kamikaze pilot or the suicide bomber, fanatics ready to, you guessed it, rid the world of inferior beings. It’s so much easier to squeeze the trigger when your target has been divested of humanity!

To clean up society, that is, a society where there are fewer descamisados to spoil your lunch or your stroll through the mall, you do need a leader. And President Duterte is that man, the extraordinary alpha male of the pack.

When he growls, the whole pack growls.

When he barks, the whole pack barks.

When he bares his teeth, as he did in insulting President Obama, the whole pack bares their teeth.

This alpha male extraordinaire knows the value of a circus, not the Barnum & Bailey type, mind you, but the circus as the Romans envisioned it, where blood sport in the arena served as catharsis and, just as important, distraction, for the citizens of the imperial city.

There is one huge difference, however, between the gladiatorial combat of Roman times and the blood sport being practiced daily in the Philippines. The gladiators in Rome were armed and each had a chance to survive the battle to the death. And even when the vanquished lay helpless on the floor, the victorious gladiator would wait for the crowd and the emperor to signal either thumb’s up (life) or down (death).

In today’s Philippines, only one party is armed in this blood sport. Taking, as always, its cue from the alpha male, the bloodthirsty pack, filled with canine devotion, always turn their thumbs’ down.

And there’s the irony for in doing so, they themselves render themselves inhuman, faithful dogs of war.