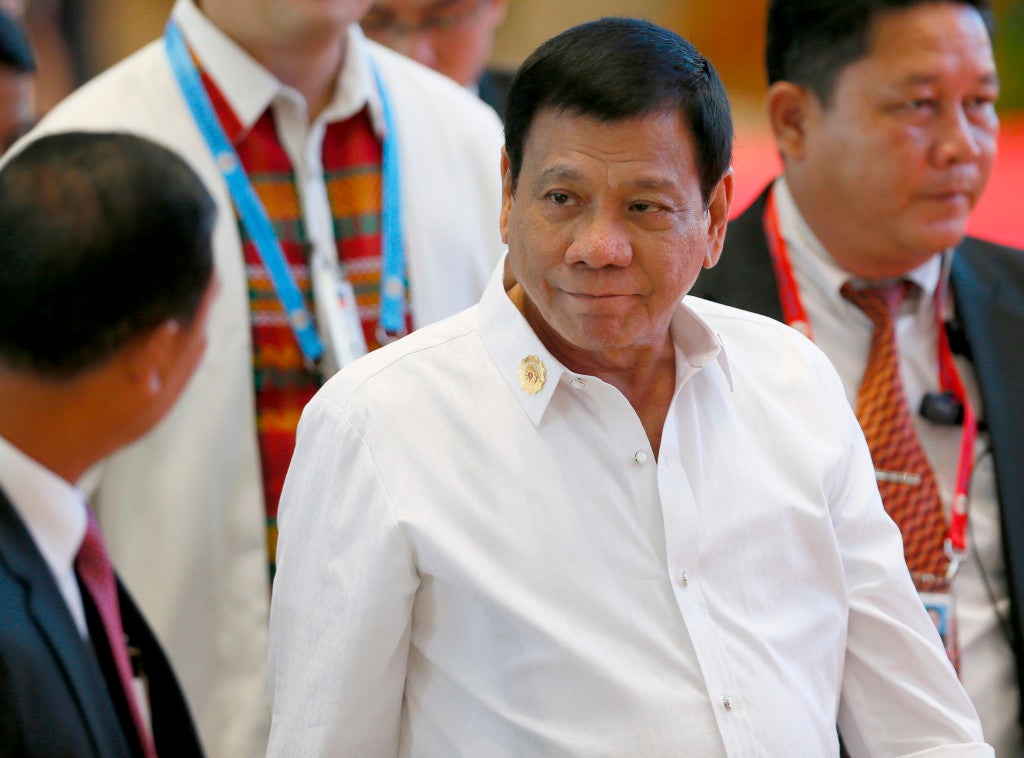 Philippine President Rodrigo Duterte arrives at the National Convention Center for scheduled bilateral meetings with ASEAN leaders on the sidelines of the 28th and 29th ASEAN Summits and other related summits Tuesday, Sept. 6, 2016 in Vientiane, Laos. AP

Philippine President Rodrigo Duterte expressed regret Tuesday that his comments branding US leader Barack Obama a “son of a whore” came across as a personal attack.

The insult on Monday was the latest offensive comment to raise questions about Duterte’s diplomatic skills, leading Obama to cancel a planned meeting with him at a regional summit in Laos.

Here are 10 of his most undiplomatic remarks from before and after his landslide election victory this year:

Respect me, son of a whore

“You must be respectful. Do not just throw away questions and statements. Son of a whore, I will curse you in that forum.”

Duterte, who has launched a war on crime that has claimed more than 2,400 lives, warns Obama not to raise human rights issues with him in Laos.

“I’m fighting with (US Secretary of State John Kerry’s) ambassador. His gay ambassador, the son of a whore. He pissed me off.”

— Duterte in an August speech smarting over US Ambassador to Manila Philip Goldberg’s criticism of his comment about wanting to rape a “beautiful” Australian missionary.

READ: Duterte on calling Goldberg gay: Why should I apologize?

“Fuck you, UN, you can’t even solve the Middle East carnage… couldn’t even lift a finger in Africa… shut up, all of you.”

— Duterte in a June press conference, a seemingly unprovoked attack on the world body.

“Maybe we’ll just have to decide to separate from the United Nations. If you are that disrespectful, son of a whore, then I will just leave you.”

— Duterte in an August news briefing after a UN human rights expert said orders in his anti-crime crackdown violated international law. He later said he was just joking.

READ: Duterte threatens to pull PH out of UN

“Ban Ki-moon, he should write to me so that I will tell him: ‘You did nothing. People are being massacred by the thousands. You can’t stop (the war) in Turkey, Syria.’ So one useless, inutile body.”

— Duterte in an August press conference railing against the UN chief after Ban denounced his apparent endorsement of extrajudicial killings.

“I will go there on my own with a jet ski, bringing with me a flag and a pole and once I disembark, I will plant the flag on the runway and tell the Chinese authorities, ‘Kill me!'”

— Duterte in a February campaign speech explaining how he would handle Manila’s row with Beijing over the South China Sea. He has since adopted a more cautious tone.

“That’s the invention of a woman who wants to commit suicide. You can think of genocide, suicide or what, side by side, upper side, whatever, what if upper side or even upside?”

— Duterte launches a rambling verbal assault on Agnes Callamard, the UN special rapporteur on summary executions, after she accused him of violating international law with his statements seen as inciting people to kill.

READ: No one invited you, Palace tells UN official

“I burned the flag of Singapore. I said: ‘Fuck you … You are a garrison pretending to be a country.'”

— Duterte in a November speech, recalling how in 1995 he burned a Singapore flag to protest at the execution of a Filipina maid in the city-state.

“You are not a warrior if you do that. We are not Arabs. That is not our culture. We are all Malay.”

“It took us five hours to get from the hotel to the airport. I asked who was coming. They said it was the Pope. I wanted to call him: ‘Pope, son of a whore, go home. Don’t visit anymore.'”

— Duterte in a November 2015 speech recalling being stuck in Manila traffic when Pope Francis visited the Philippines.