Philippine President no longer sure if meeting with Obama will happen
By: Marlon Ramos - Reporter / @MRamosINQ
Philippine Daily Inquirer / 12:02 AM September 06, 2016 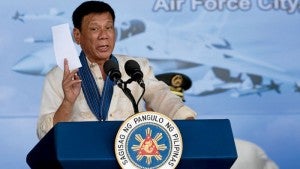 VIENTIANE, Laos — President Duterte said he felt slighted when the US State Department issued statements regarding his administration’s brutal war on illegal drugs.

The President, who met with a group of Filipinos here briefly after he arrived from Davao City on Monday night, blamed American officials for setting off the virtual word war between him and US President Barack Obama.

“I do not want to quarrel with the most powerful country on the planet,” Mr. Duterte told reporters after speaking at the gathering of the Filipino community at Feungfar Convention Center.

He also took exception to the warning issued by Obama’s national security adviser, Susan Rice, that the US would bring up the issue of extrajudicial killings against Mr. Duterte at the 28th and 29th Association of Southeast Asian Nations (Asean) summits here.

“That is not a proper subject of a summit like this. It would be improper and highly disrespectful,” he said.

Said the President: “If at all, it should be done in the highest level of diplomacy. I am not a governor of a state or a city mayor of the United States.”

Asked if the bilateral meeting between him and Obama on Tuesday would push through, he said: “I don’t know. Maybe.”

Before flying to Viantiane, Mr. Duterte scoffed at Obama for the American leader’s plan to question his take-no-prisoner approach to curb the illegal drug trade.

“I will kick him (Obama) in front of you,” the President said in his departure speech.

President Duterte has been scheduled to meet Obama on Tuesday (Sept. 6) after the opening of the 28th and 29th Association of Southeast Asian Nations (Asean) summits here.

If it pushes through, the President’s bilateral talk with Obama would be the first in his series of meetings with nine heads of state on the sidelines of the three-day Asean conference.

The office of Presidential Communications Secretary Martin Andanar said Mr. Duterte has been scheduled to meet with the American leader at the Landmark Hotel at 4:10 p.m.

Malacañang, however, did not provide the topics to be discussed during the President’s 40-minute meeting with Obama.

But in an earlier statement, the Department of Foreign Affairs (DFA) said the Chief Executive would discuss with the American president his administration’s take-no-prisoner strategy in combatting illegal drugs, which has led to the deaths of some 2,000 drug suspects and triggered international condemnation.

In his maiden appearance on the world stage as head of state, Mr. Duterte will also rally his counterparts from the Asean to make the region free from the narcotics trade.

In addition, he will discuss issues regarding cross-border crimes such as terrorism, human trafficking and drug smuggling. He will also urge regional leaders to support efforts promoting closer economic cooperation.

Mr. Duterte’s official trip, which came just three days after a bomb tore through a night market in his hometown of Davao that left 14 people dead and 68 others wounded, was also his first foreign travel since winning the May 9 balloting.

UN Secretary General Ban Ki-Moon had asked for a meeting with Mr. Duterte, but the DFA said the President could not accommodate the request because of his tight schedule during the yearly conference of the regional bloc.

The President, who flew here from Davao City Monday night, will attend the opening ceremony of the Asean summit at 1 p.m.before proceeding with his meeting with Obama.

He will also attend eight other events on his first day, including a courtesy call with Lao Prime Minister Thongloun Sisoulith and a welcome dinner hosted by the Lao government for the visiting Asean heads of state.

On Wednesday, the President will go to nine events, among them related Asean leaders’ summits with dialogue partners Australia, South Korea, Japan and the United Nations.

On the third and last day of the summit on Thursday, the Chief Executive will appear in seven events, including meetings of Asean leaders with their counterparts from India and the United States.

Mr. Duterte will also officially receive from Sisoulith the chairmanship of the Asean meeting, which will be held in the Philippines in 2017.  SFM