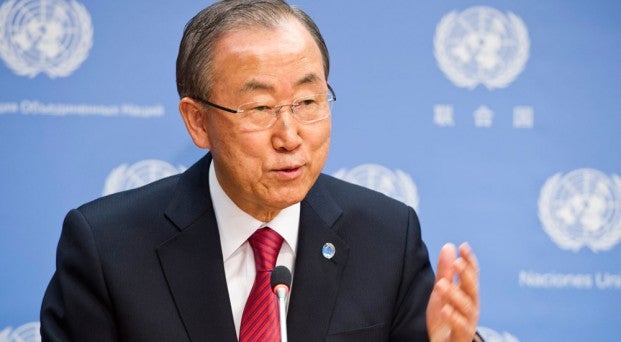 PRESIDENT Duterte has declined a meeting with UN Secretary General Ban Ki-moon, according to the United Nations and the Department of Foreign Affairs.

Ban had requested the bilateral meeting in Laos, which is hosting a summit of the Association of Southeast Asian Nations (Asean) leaders next week, but Mr. Duterte could not fit it into his schedule.

“A meeting was requested but we could not agree on a time,” Ban’s spokesperson, Stephane Dujarric, said on Thursday.

A second UN official said the request for a meeting was rejected because of a “scheduling incompatibility.”

Foreign Assistant Secretary Ma. Hellen de la Vega told reporters in Malacañang yesterday that Ban was among world leaders who sought a meeting with Mr. Duterte but the President’s summit schedule was quite tight.

“I think the President has a very tight schedule and there are very clear priorities,” De la Vega said.

Asked why a meeting with Ban could not be prioritized, De la Vega said: “I cannot second guess what our leaders have in mind.”

She said the President’s summit schedule allowed him to sit down with only nine heads of state from the Asean and its dialogue partners.

De la Vega declined to identify them, but confirmed that Mr. Duterte would meet with US President Barack Obama and Russian President Vladimir Putin.

“Preliminarily, it’s very unlikely for the President to meet with the UN secretary general bilaterally,” she said.

In recent days, Mr. Duterte has launched profanity-laced tirades against the United Nations for criticizing his brutal war on illegal drugs.

More than 2,000 people have been killed by police and suspected vigilantes since Mr. Duterte launched the campaign on July 1, when he took office, encouraging police and armed citizens to kill drug suspects who would resist arrest and promising law enforcers protection from prosecution.

“Directives of this nature are irresponsible in the extreme and amount to incitement to violence and killing, a crime under international law,” UN special rapporteur on summary executions Agnes Callamard said in a statement posted last month on the website of the UN High Commissioner for Human Rights.

“Claims to fight illicit drug trade do not absolve the government from its international legal obligations and do not shield state actors or others from responsibility for illegal killings,” Callamard said.

UN special rapporteur on the right to health Dainius Puras said the fight against illegal drugs must “respect the human rights of each person.”

Ban said extrajudicial killing was “illegal and a breach of fundamental rights and freedoms.”

Angered by the criticism, Mr. Duterte called the United Nations “stupid” and “inutile” and threatened to withdraw the Philippines from the world body.

“Maybe we’ll just have to decide to separate from the United Nations. If you are that disrespectful, son of a bitch, then I will just leave you,” he said.

He later said the threat was just a “joke,” but stressed that the United Nations should observe protocol when making statements about his administration’s campaign against narcotics.

De la Vega said Mr. Duterte would discuss with his Asean counterparts his controversial approach to solving the narcotics problem, which, he claimed, had risen to “pandemic” proportions due to the failure of the Aquino administration to deal with it.

Mr. Duterte, who promised to kill tens of thousands of criminals and put an end to the illegal drug trade within the first six months of his presidency, would also bring up cross-border security issues such as terrorism and human trafficking, De la Vega said.

She said the President would formally accept for the Philippines the chairmanship of Asean, whose next summit will be held in Manila in January 2017.

While Mr. Duterte had said he would not raise the victory of the Philippines over China in the UN-backed Permanent Court of Arbitration in The Hague, De la Vega said “our aspiration for a legally binding code of conduct” in the disputed South China Sea would also be tackled by the President.

“The President is expected to give his insights on the thrust of his administration, the overall bilateral relations (with other countries)… and exchange of views on regional issues,” she said.

As for Mr. Duterte’s meeting with Obama, De la Vega said the President had done his homework and was “prepared” to answer the American leader’s concerns about the rising drug killings in the Philippines.

“I think the President is prepared,” she said. “That’s why his first statement is to ask President Obama to listen to him so he can discuss and explain to him the problem that we face as far as the drug problem is concerned.”

De la Vega said she had briefed Mr. Duterte, notorious for rudeness and his foul mouth, on the protocols and formalities during the Asean leaders’ conference.

When asked about the President’s reaction to her reminders, she said: “He (just) smiled.”

Asked if she also told Mr. Duterte to refrain from cursing during the international summit, she said the President’s statements were “borne out of his frustration.”

“Different leaders have different management styles. My sense of him is that he wants us to serve with urgency. So I think he gets frustrated because he doesn’t get a sense of where we are,” she said.