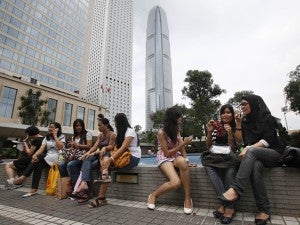 POLARIZED HONG KONG Foreign maids gather in Central, business district in Hong Kong Saturday, Oct. 1, 2011. A Filipino maid in Hong Kong won the opening legal battle in her fight for permanent residency after a court ruled Friday that an immigration provision excluding the city's hundreds of thousands of foreign maids was unconstitutional. The decision has polarized opinions in Hong Kong and has also prompted different reactions among maids themselves. AP photo/Kin Cheung

HONG KONG—Every Sunday, the public spaces and walkways of Hong Kong are jammed with Filipina and Indonesian domestic workers using their one day off to gather with their friends and fellow countrywomen.

The gleaming skyscrapers of the financial hub are a far cry from the often poor neighbourhoods they have come from.

Now a landmark court ruling has given them a chance to apply for permanent residency – but the decision, which has polarized opinions in the southern Chinese city, has also prompted different reactions among maids themselves.

Newspapers are filled with opposing arguments and rival protests were held in the run-up to the case hearing. About 500 people held a protest Sunday against the court ruling.

For some maids, the ruling represents the hope of a better future. Lannie Hubag, 45, a Philippine domestic helper in Hong Kong since 1998, said she would consider applying for permanent residency.

“I would like to try because if I get it, my husband and two daughters in the Philippines can join me in Hong Kong and my daughters could get better education,” said Hubag.

“We’re happy with the court decision because it means the discrimination has been removed,” she added.

But costs and family ties are a deterrent for others. Speaking in her native Indonesian, Asriyatun, 34, said: “I would like to go back” without hesitation, after working for six years in Hong Kong.

Foreigners can seek permanent residency in Hong Kong after seven years of uninterrupted stay, gaining rights to vote and to live in the city without a work visa.

There are as many as 292,000 foreign maids in the city, but they were specifically excluded from being allowed to apply. In the first case of its kind in Asia, the city’s High Court ruled on Friday that the provision was unconstitutional.

Permanent residency would mean a domestic worker was no longer tied to a single employer, but could take any job and access benefits such as public housing.

According to a pro-government political party there could be an influx of as many as 500,000 people – including children and spouses of foreign maids – costing HK$25 billion ($3.2 billion) in social welfare spending.

Unemployment could jump from the current 3.5 percent to 10 percent, the Democratic Alliance for the Betterment and Progress of Hong Kong claimed.

Following the ruling, currently about 117,000 foreign maids are entitled to apply for permanent residency in the densely populated city of seven million, where rents are sky-high and the income gap widening.

“I love Hong Kong, it’s a great city and we are treated better here,” said Asriyatun, wearing a black Islamic headscarf and chatting with a group of other Indonesian maids in Victoria Park, their regular meeting spot.

“But I have no plan to apply for permanent residency when I become eligible next year. I’m here to work, I have a family in Indonesia, I want to go back.”

Others in her group agreed.

A single mother, Asriyatun left East Java when her son was eight months old to become a domestic helper in Singapore, and later moved to Hong Kong. She works for a German banker’s family and her contract will expire in 2013.

“I’m here to work for a living and for my son’s future so when he grows up, he doesn’t have to go elsewhere to work and be separated from his child – just like me,” said Asriyatun.

Dolores Balladares from Asian Migrants’ Coordinating Body, which represents 8,000 foreign maids in the city, said: “It’s only a main barrier that has been removed, it doesn’t mean we get this right automatically.

“The standard of living is very expensive here, it’s not easy. After working for many years in Hong Kong, many of the foreign domestic helpers just want to go back to reunite with their family,” said Balladares, a university graduate who has been a maid for 17 years.

Hong Kong is known as a better place for domestic helpers than many other parts of Asia. The city’s foreign maids are guaranteed one day off a week, paid sick leave and a minimum wage of HK$3,740 ($480) a month.

But rights groups say they still face general discrimination and a lack of legal protection. A maid’s visa is tied to a specific employer and activists say this leaves her vulnerable.

The government was disappointed with Friday’s ruling and said it would appeal.

It is planning to seek the court’s permission to not process any foreign maids’ residency applications while the appeal is under way, and some lawmakers have called on Hong Kong to refer the issue to Beijing.

“We recognize the contribution of domestic workers and their role in our economy, they free up many local women to join the workforce,” said businessman Jeff Lam, who opposed granting maids permanent residency.

“To give them permanent residency, however, is a separate story,” said Lam, who himself has a Filipina domestic worker to help with house chores.