Amnesty Int’l activist lives up to his name — Kalaya’an 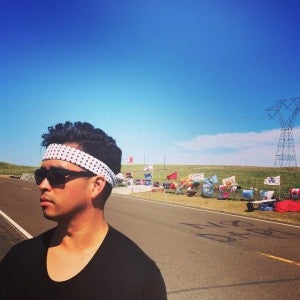 SAN FRANCISCO — Like many Filipinos, the Mendoza family fled to the United States in 1982 to escape the Marcos dictatorship and to secure a safer future for their children. One of the two children, Kalaya’an Mendoza, now 37, was able to watch the People Power Revolution on television as a child. Today he is the US field director of Amnesty International, working for freedom and social justice for marginalized communities.

Mendoza is currently with the Dakota Access Pipeline protests. The Oceti Sakowin (Great Sioux Nation) is fighting against an oil company that plans to build a pipeline that could pollute their only water source and desecrate sacred land.

“As a settler colonial in this occupied land, it’s my responsibility to stand with all Indigenous peoples in their struggle for self-determination, justice and dignity,” says Mendoza.

He says his identity as a Filipino and a queer gives him strength because he is able to see the intersections between struggles. This realization brought him to social justice movement work with other marginalized communities early in his youth.

After attending the University of California in Santa Barbara, majoring in global studies, he joined Students for a Free Tibet. He went to China along with other activists during the 2008 Beijing Olympics to protest China’s occupation of Tibet.

While there Mendoza, along with others, was detained and had his foot broken by the Chinese authorities. They were heavily interrogated before being deported. The US government, he says, did not give them assistance.

The experience left him with post-traumatic stress disorder. But it did not deter him from social justice work. In 2009 he joined Amnesty International and became its United States field director.

Calling himself a Queer (a group that’s part of LGBTQ), he experienced oppression and discrimination in his youth because of his identity as a Filipino and his sexual orientation. The burden of prejudice weighed on him even while he was growing up as a transplant in America.

“Due to my heavy Tagalog accent I was put into an ESL class in the third grade in spite of the fact that I read at a sixth-grade level. This sense of shame about my culture and language was instilled in me at a young age by the American school system,” he recalls. 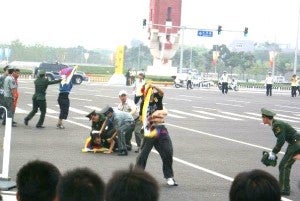 Kalaya’an Mendoza being held down by the Chinese policemen during the Free Tibet protest an hour before the start of the Beijing Olympics on August 8, 2008. CONTRIBUTED

Mendoza’s parents spoke to him and his sister mostly in Tagalog, but the humiliation he experienced as a child deterred him from learning the language well.

“I grew up carefully cultivating an ‘American’ accent trying desperately to talk and look like the people I saw on television. To this day, this trauma has hindered by ability to learn and speak Tagalog and Kapampangan,” Mendoza says.

When he was a teenager, he joined Filipino cultural organizations to be able to forge a deeper connection with his roots. His parents worked 14-hour jobs. They did not have the luxury of time or money to go back home for visits.

“I hungrily spent hours in the library devouring books about the Philippines and our magnificent culture. I led Filipino youth organizations in order to empower our community and to build ties with my people,” he recalls.

It wasn’t until he went to the Philippines in 2014, for the first time in 35 years, that he realized that regardless of how Filipino he felt, he was still an American, complete with all the access and privilege that come with that identity.

“I have come to realize that my identity is like our homeland — an archipelago. There are aspects that are disparate from one another yet combined represents me as a whole,” Mendoza explains.

Having to exist in two worlds was always a challenge to understand. Filipino cultural norms of hospitality, respect, community and love for family were something he did not see among his American friends. 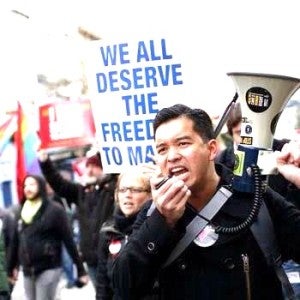 Kalaya’an Mendoza, US field director of Amnesty International, in a protest action. CONTRIBUTED

“I remember seeing things like my friends yelling at their parents or walking around their house in their shoes. I couldn’t help but think how barbaric and sad their culture was,” he recalls.

“Growing up Brown in this country meant that you had to resist or assimilate. I tried the latter for the longest time and found that no matter how hard I tried to be an American, I would always be seen as the perpetual foreigner. No matter how much I bleached my hair or wore blue contacts or rubbed my skin with Eskinol, I would never be what people think of as an ‘American,’” Mendoza adds.

Mendoza says that a friend from Organizers of Color helped him to love and embrace his brown skin and black curly hair.

Like many human rights workers, Mendoza suffers from burnout — emotional, physical and spiritual. He says oftentimes they do not have time for themselves.

“I am a staunch advocate for self and community care. I strongly believe that if we do not take care of ourselves we will not be able to take care of our people,” explains Mendoza.

Mendoza says that the Filipinos are powerful people who have inherited the legacy of resistance. “We are the descendants of babaylans and warriors. Our strength can be found in our history and our shared vision for the future. It’s vastly important to decolonize our minds and bodies from the centuries of oppression we faced under the Spanish and Americans. We will prevail as a people, because victory and resistance is in our blood,” Mendoza concludes.