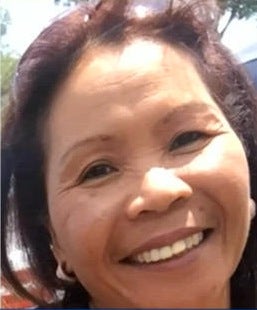 VALLEJO, California —Prosecutors added a murder charge to the kidnapping case against one of four suspects arrested in July for the abduction of 57-year old Filipino American mother Elvira Babb.

A murder charge was lodged against Emanuel D. Espinoza, 26, and prosecutors also added special circumstances, which could lead to the death penalty for Espinoza. Prosecutors dropped all charges against Lovely M. Ruazol, 27, of Fairfield.

Judge Tim Kam postponed the probable cause hearing for the three suspects until Sept. 20. The kidnap victim’s body has not been found. Her son, John Babb, had no comment on the added murder charge.

Elvira Babb disappeared July 1 having been last seen by coworkers at Seafood City. Her chihuahua was found dead in her home Daniels Avenue in Vallejo. John received a text message saying his mom was being held for ransom and would be killed unless the kidnappers received $60,000.