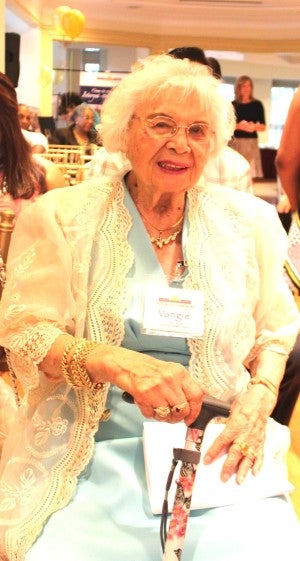 “She is as spry as ever,” friends say of their neighbor, Vangie Paredes, who turned 100 on July 26. JON MELEGRITO

WASHINGTON, D.C. — “I said a prayer of thanks to the Lord,” Vangie Paredes said when she woke up on the morning she turned 100. “But that’s always the first thing I do when I wake up, thank God for giving me another day to live.”

Born July 26, 1916 in Brooklyn, New York, to a Filipino father and a Spanish mother, Paredes is also grateful that “I’m still able to live at home in retirement, instead of going into an institution.”

Described as “spry as ever” by neighbors in this city’s southwest community where she lives by herself, Paredes chalks it all up to her three decades of volunteer work at veterans’ hospitals and senior citizens’ homes. 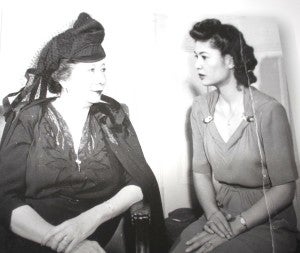 “It’s all a part of my plan of enjoying family and friends, keeping busy and active in my community, and staying in good health,” she said. “Volunteering is so rewarding.”

A link to history

Paredes made these remarks recently at an event held in her honor at the Philippine Embassy. More than a hundred family members and friends, university students and community leaders attended the evening program billed as “Celebrating Our Washington, D.C. Centenarian.”

The program, which included a reception and exhibit, was co-sponsored by The Rita M. Cacas Foundation, Inc. a non-profit charitable organization that helps acquire, preserve and provide access to histories, culture and archives of Filipino Americans in the metropolitan area.

In her tribute, Cacas, founder and president of the foundation (who used gardening as the metaphor to describe the evolution of the archives), hailed Paredes as “an important heirloom seed” whose life ran parallel to some significant markers in American and Philippine history, notably:

Paredes was born the same year the U.S. Congress passed the Jones Law that paved the way for Philippine independence. Her family moved to Capitol Hill in 1921, around the same time women were given the right to vote. In 1934, while she was a high school student, the Tydings-McDuffie Act was passed, which established the Philippine Commonwealth. In 1942 she started working as a secretary to President Manuel L. Quezon for 20 years. 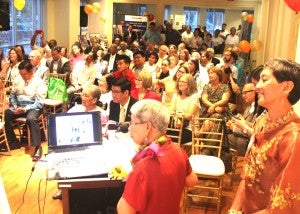 Rita Cacas, right, and more than a hundred guests, listen to Paredes’ remarks during the Philippine Embassy reception. JON MELEGRITO

Paredes, Cacas concluded, is “an important link to our history, and we thank her for planting stories and seeds in our DC community garden.”

In his remarks, Charge D’Affaires and Minister Patrick A. Chuasoto of the Embassy of the Philippines highlighted the celebration of “history and her-story, the life of a centenarian from our community who had the privilege to serve under Manuel L. Quezon, statesman, leader of the Philippine independence movement and the first president of the Philippine Commonwealth.”

Paredes was five years old when her family moved from New York to Washington, DC, where her father worked as a chief master mechanic at the US Navy yard. She was the oldest among eight siblings. They were among a number of Filipinos that migrated to the District in the early 1900s. She grew up on the east side of the Anacostia River in Ward 8, where she has lived for more than 60 years.

After graduating from Eastern High School in 1936 she went to George Washington University for two years before receiving her diploma from the Washington School for Secretaries.

In 1940, she married Juanito Paredes, nephew of Quentin Paredes, Philippine Resident Commissioner. They had two children. Juanito died in 1971.

At the Resident Commissioner’s Office, Paredes held various positions including executive secretary to the Secretary of War, public relations officer and secretary to President Quezon.

“I could never cook, and I never learned to keep house very well,” she said in a recent Washington Post story. “But my shorthand was 200. And my typing was 200 words a minute.”

July 26 may have been just another ordinary day for the centenarian, but it was “a milestone” to her many admirers in the city who knew of her decades of volunteer work. 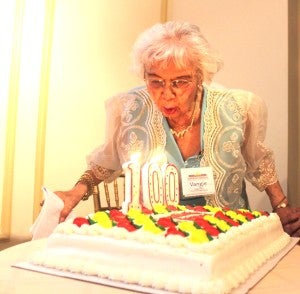 Paredes blows the candles on her birthday cake during a reception in her honor at the Philippine Embassy. JON MELEGRITO

On her 100th birthday, members of AARP, the Ward 8 Commission on Aging, the DC Office on Aging, the Legal Counsel for the Elderly, the Anacostia Coordinating Council and her housing cooperative put together a celebration for Paredes at a community center, replete with balloons, noisemakers and a birthday cake.

Accolades came from DC Mayor Muriel Bowser, who commended Paredes for her community service and volunteer work at the Veterans Medical Center, and from DC Representative Eleanor Holmes Norton who lauded her “wisdom and experience.”

“I want to be just like Vangie when I get to be her age,” said Ward 8 Council member LaRuby May. “She’s amazing.”

In 2010, Paredes was the recipient of AARP’s Andrus Award, the association’s most prestigious volunteer tribute, which “recognizes outstanding individuals for sharing their experience, talents and skills to enrich the lives of others.”

Also present was Maj. Gen. Antonio Taguba, AARP’s Community Ambassador, who describes Paredes as a “rarity.” There are not very many people her age, he points out, who continue to be active volunteers with a passion and purpose. “She makes our world a richer, better place.”

In a recent interview with Petula Dvorak of the Washington Post, Paredes said Hillary Clinton’s nomination for US president by the Democratic Party “was the best gift you could get a woman. It was history. I never imagined I would see it.” 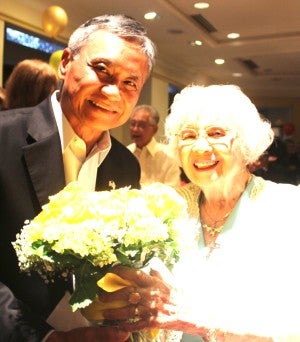 Dvorak noted that Paredes was born at a time when women couldn’t vote. That came four years later, when the Constitution was amended granting women the right to vote.

“For most of my life, women were treated as second-class citizens,” she said in the interview. “With Hillary, she’s been around, she’s been down, she’s been up. Mother. Senator. Secretary of Dtate. She’s had it all. And she will show we don’t need a man to do that job.”

Clinton formally accepted the Democratic nomination on July 28, two days after Paredes’ 100th birthday. Paredes has voted in every presidential election since she turned 18, casting her first ballot for Franklin Delano Roosevelt and her latest for Barack Obama.

“I hope to make it to the polls in November,” Paredes said.

Today, Paredes continues to be active in her Southeast Washington, DC community, in the AARP DC community, as well as in the Filipino American community, where she serves as an officer of the VFW Auxilliary.

In 2007, at the first Filipino American Studies (FAST) Gala at the University of Maryland, Paredes received an award from the Filipino Cultural Association (FCA) honoring Filipino pioneers.

“As our community centenarian, she continues to be a vital link to the history of Filipino-Americans in Washington, DC,” Cacas said. 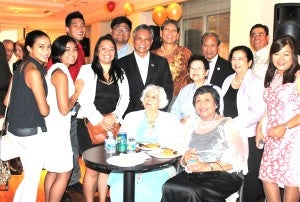 Students, community leaders and friends gather around the birthday celebrant for a group picture. JON MELEGRITO

Josh Tan, a senior at the University of Maryland in College Park and a member of FCA, was in awe of what Paredes has accomplished. “Her life is truly inspiring, especially her dedication to serving others,” he says. “It’s something that we of the millennial generation are aspiring for – living a life of meaning.”

Joey Manlapaz, an artist and niece of Paredes, said her aunt’s life of volunteerism “makes me ashamed. We should all emulate her example and spend some time helping others, be engaged in noble causes and lead an active life of service.”

In her closing remarks, Paredes gave this advice: “Continue a yearly physical examination, exercise and eat healthy. Keep active and you, too, will live to 100 years or more.”

As to her secret to a long, productive life? “I refuse to be unhappy or to have people around me who don’t want to be happy,” she says. “I don’t let anything or anyone bring me down.