Vietnam says all will lose in any South China Sea war 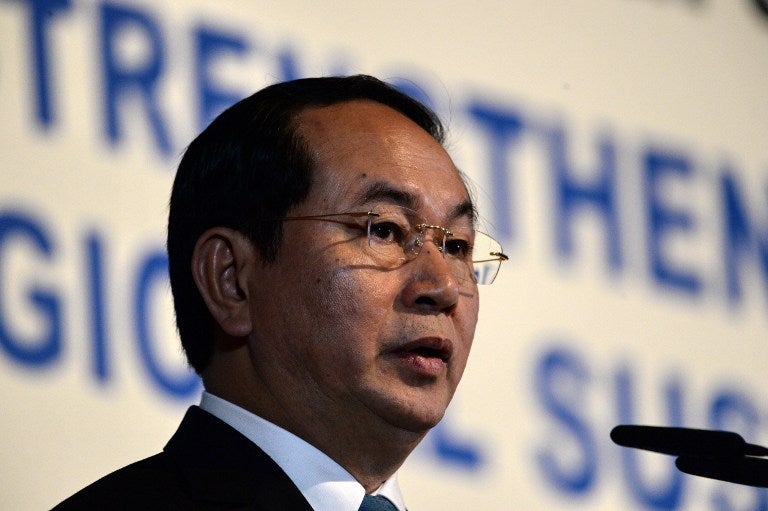 SINGAPORE – Vietnam’s President Tran Dai Quang warned on Tuesday there would be no winners in any armed conflict sparked by territorial disputes in the South China Sea.

Quang, who is on a state visit to Singapore, told a forum that recent developments there were threatening regional security.

The Vietnamese leader did not mention any country but there is growing unease over China’s actions.

China claims most of the South China Sea. It has reclaimed reefs and built airstrips capable of hosting military equipment, sparking anger from competing claimants led by Vietnam and the Philippines.

“The South China Sea, located at the heart of Southeast Asia, not only brings about many important benefits to nations in the region but it is also a vital route to maritime and air transport of the world,” Quang said.

But “recent worrying developments” there “have had a negative impact on the security environment of the region, especially maritime security and safety, freedom of navigation and overflight”.

“And should we allow instability to take place, especially in the case of armed conflicts, there will be neither winners or losers but rather all will lose,” he warned.

Tran was speaking to diplomats, academics and students at a forum organized by the ISEAS Yusof Ishak Institute.

Four Southeast Asian states – Brunei, Malaysia, the Philippines and Vietnam – as well as Taiwan have competing claims in the sea.

Vietnam has been among the most vocal critics of China’s blanket territorial claims. In 2014 China moved a controversial oil rig into contested territory, prompting riots in Vietnam.

China’s activities in the sea have also drawn criticism from the United States, which says it seeks to ensure freedom of navigation in the waterway through which $5 trillion in annual global trade passes.

The sea row has also driven a wedge between members of the Association of Southeast Asian Nations, which has failed to forge a unified front against Beijing’s actions.

Last month the Philippines won a case against China at a UN-backed tribunal in the Hague which rejected Beiijing’s claims to most of the sea.

China boycotted the hearing and has refused to recognize the ruling./rga