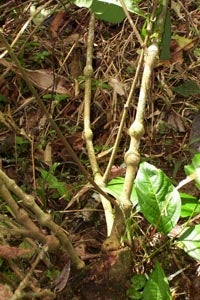 A young Ayahuasca plant, which has hallucinogenic properties. AYAHUASCA-INFO.COM

SAN FRANCISCO — Police in the district of Pisac, in Cuzco, Peru are investigating the death of a Filipino tourist who died during a ceremonial session of Ayahuasca in a locale called “Etnicas” in the city of Taray.

Ernest Villaroman, 33, a tourist, died last Saturday, Aug. 20, apparently due to the “Ayahuasc” he had being given by Rosa Rojas Nunta during the ritual.

Nunta, 50, is now under investigation for the alleged crime of wrongful death, according to a report by Latin America Current Events & News. A prosecutor has ordered her detention.

Ayahuasca is an Amazonian plant mixture that is capable of inducing altered states of consciousness, usually lasting between 4 to 8 hours after ingestion. The effect ranges from mildly stimulating to extremely visionary.

Ayahuasca is used primarily as a medicine and a shamanic means of communication, typically in a ceremonial session under the guidance of an experienced drinker, according to Ayahuasca-info.com.