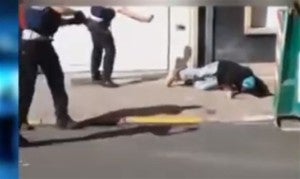 Policemen in Uccle, Belgium shoot down unnamed Filipina who stabbe three people. She was brought to a hospital and arrested. SCREENGRAB

SAN FRANCISCO — A Filipino woman, whose name has not been released, stabbed three people Monday afternoon, Aug. 22, in Brussels, Belgium.

The Filipina was wearing what seemed to be a headscarf. Police, however, believed the suspect was mentally ill and not a terrorist.

The 52-year-old woman reportedly had an altercation on a bus before the attacks.

She allegedly attacked two of the victims while on the bus and one at a restaurant in a shopping mall in Uccle, part of greater Brussels. Police then shot and detained her, according an RT.com report.

The victims’ injuries are said to be non-life threatening, and the Filipina was taken to a hospital where she was treated then placed under arrest.

In a video footage filmed from inside the shopping mall, the woman can be seen sitting on a bench as six police officers close in.

The woman refused to throw away the knife when the officers asked her, and instead she ran away and was shot outside in the street. Prosecutors told news media that she had no criminal history.