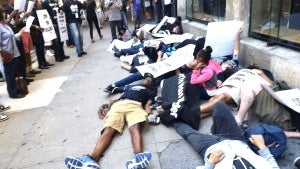 Protester stage a die-in in front of the Philippine Consulate in New York to protest extrajudicial killings in the government’s war on drugs. VOCAL-NY WEBSITE

NEW YORK CITY — Protesters picketed and staged a die-in in front of the Philippine Consulate on Fifth Avenue Aug. 23 against the rash of summary killings by police and vigilantes of suspected drug users and pushers.

Protesters held signs saying, “Drug dealing and drug use should not be reasons for execution!” and read the names of over 1,000 Filipinos who have been killed as a result of President Rodrigo Duterte’s war on drugs.

President Duterte has openly encouraged police and citizens to kill drug users and pushers in their communities.

A grassroots organization called VOCAL-NY active on issues of drug use, HIV/AIDS and mass incarceration organized the die-in.

Police and vigilante killings in the Philippines have reached 1,800 in just nearly two months since the new president was sworn into office, according to a police official during Philippine Senate hearings on extrajudicial killings on Monday, Aug. 22.

Duterte’s campaign for the presidency vowed that he would rid the country of drugs, but critics scored the policy as a violation of human rights and due process.

The policy of “shoot to kill” against drug offenders has been criticized by the UN and Human Rights Watch.