Duterte on UN pullout:  Can’t you take a joke? 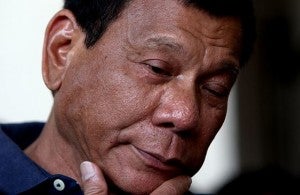 MANILA — While he was angry at the United Nations for commenting on the spate of drug-related killings in the country, President Duterte said his threat to leave the world body was said in jest.

“Can’t you take a joke? What will you join, the association of those who have sunk?” Mr. Duterte told reporters in an ambush interview.

But Mr. Duterte, who had lashed out at the international organization, said the UN should behave “the way [it] should behave.”

Duterte said the head of the UN should be communicating with his government, not an agency or a bureaucrat of the international organization.

“[She] should request the (UN) President to write me a letter because they are pointing to a government, not to an individual,” Mr. Duterte said.

He said it was “rude” for a UN official to go directly to him with her concerns, instead of coursing these through her superiors.

“There has to be a superior who will write a letter, or respect, before saying anything about genocide,” he said.

UN Secretary General Ban Ki Moon could write to him, the President further said. But he would hurl back his own accusations.

He said he would tell the UN chief that he himself was unable to stop wars and to stop people from being massacred in Turkey and Syria.

“I would also investigate him. Why was he unable to stop kidnapping in Nigeria?” he added.

Mr. Duterte also said that if the UN rapporteur had something to say about killings in the Philippines, she should comment as well on the killing of African-Americans in the US.

“Why just pay attention to the Philippines? There were also a lot of blacks who died in America,” he said.

As for the concern of the US Department of State about killings in the Philippines, the President said his government was also concerned about the killing of African-Americans in the US.

Mr. Duterte said he had his own issues to raise about the US.

“The Philippine government is also worried about what’s being done to the black people in America, being shot while lying down. I’m going to send my rapporteur also and investigate them,” Mr. Duterte said when sought for comment on the US statement.

African-Americans were also being killed on “trumped up charges,” he said.

“There’s a hatred there being sown by their governor,” he added.  SFM