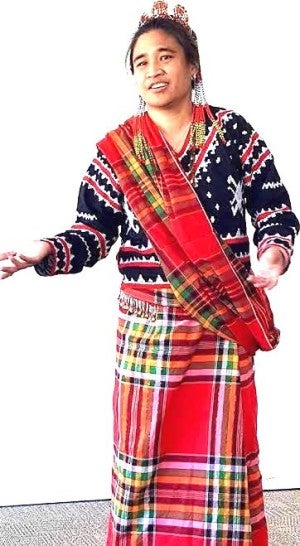 Rebecca Mabanglo-Mayor uses storytelling to link Filipino Americans with their roots. She dons a T’boli dress in one of her performances. JR GUERRERO

SAN FRANCISCO — Rebecca Mabanglo-Mayor, 51, a writer, storyteller and creativity coach sees herself as genetically Filipino but American by birth. Her unique experience of being a child of immigrant parents and growing up during tumultuous events, like the Vietnam War, the Alcatraz takeover and martial law in the Philippines, enables her to “live in dualism” and flourish as a storyteller.

But first she had to struggle while growing up, an experience that, ironically, is also the source of many stories she shares.

Rebecca was disconnected from her Filipino heritage when she was young, so that even the chance to learn Filipino was denied her.

“I had to succeed in school in order to succeed in life, and so my parents only spoke to me in English and pushed me to speak articulately,” she recalls.

“They used their own tongues as a private language, and I often wondered what topics of the day they discussed. I’m sure they were worried about a great many things and used their language to have conversations they were uncomfortable having with me because of my age,” says Rebecca.

Rebecca’s maternal grandfather was a Philippine Scout who served during World War II. When he joined the US Army, he was able to go to San Francisco and eventually move to Seattle. Rebecca’s mother was 20 years old then. Her parents met in Seattle in 1956, got married in 1961 and settled in Seattle-Tacoma area.

When she was a child, Rebecca’s family visited the Philippines twice during the Christmas season.

“To be around so many children with brown skin like me was something of a culture shock. There were very few non-white children in my grade school here. I was probably one of about a half-dozen children who were not white. As a child, I linked heritage to language, and since I didn’t speak Tagalog except for a few words like “Opo” and “Salamat po,” I saw the festivities as outside myself, a sort of spectacle,” she recalls.

“When I started researching the history of Filipinos in the US around the time they immigrated, I learned that Seattle was in the process of desegregating, so there was heavy racial tension in the city,” says Rebecca.

Rebecca says that it took decades for her parents to admit that immigrating was difficult for them. But her parents believed in the American Dream and that the US was the best place for them to find good jobs and raise their children.

Having grown up in a privileged household in the Philippines, Rebecca’s mother had to endure difficulties such as doing house chores and working in cannery and in fields. Even her grandmother worked in a large laundry facility where her hand was burned in one of the large pressing machines. Rebecca remembers the scars on her hands and how her fingers could not be fully open. To escape the racial tensions in the city, the family decided to move to the suburbs, between Seattle and Tacoma.

As a child, Rebecca experienced cultural tensions triggered by the assimilation process. The Filipino community in Seattle treated her as “US-born” and felt jealous of the opportunities she had being US-born; but they “pitied” her for her inability to speak their language and lack of interest in cultural practices like dancing and singing in Tagalog.

Even now that she is active in promoting Filipino culture, she meets some Filipinos post-performances who are uncomfortable at discovering that she is US-born.

“As an adult, I have experienced the general prejudice that women of color experience – I’ve been followed around shops by clerks who thought I might steal something, I’ve been ogled and propositioned by men who see me as exotic, and I’ve been underestimated in academic circles despite my advanced college degrees,” Rebecca says.

Rebecca began as a professional storyteller in 2002. A professional writer, she started writing about Filipino culture and performing stories about it. She, of course, had to learn more about her ancestors and the history of the Philippines and it colonial relations with Spain and then the United States.

“I share the stories with others because of the richness of the tales. Since becoming a performer, I have met other US-born and first-generation Filipinos who have experienced the same sense of disconnection from their culture due to assimilation. After my shows, people will approach me to tell me about their experiences being stationed in the Philippines during various points in history,” she says.

Rebecca encourages others, immigrants and descendants of immigrants to speak or write their stories, so they can explore their experiences of disconnection. She conducts workshops that help participants access their culture in a positive way and heal the wounds caused by assimilation and acculturation.

Her poetry and essays are based on the experience of being Filipino American. Her works have been published in print and online in several journals and anthologies including Katipunan Literary Magazine; Growing Up Filipino II: More Stories for Young Adults; Kuwento: Small Things; and Beyond Lumpia, Pansit and Seven Manangs Wild: An Anthology. Her poetry chapbook Pause Mid-Flight was released in 2010.

She has collaborated with Bellingham Storytellers Guild in Washington State. She is a mermber of the board of directors of the Kathara Pilipino Indigenous Arts Collective Society, a community-based organization in Vancouver, BC of global artists, community workers, retirees, students and professionals who are multi-ethnic, indigenous and non-indigenous. It also works in solidarity with Coast Salish People.

Rebecca is married to a multiracial American; they have two teenage kids who have been raised to appreciate their mixed heritage.