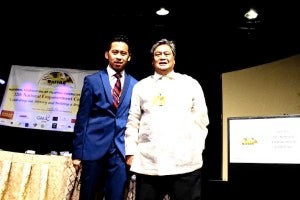 WASHINGTON, DC — A millennial has taken over the helm of the advocacy and empowerment organization National Federation of Filipino American Associations (NaFFAA).

Brendan Flores, 31, Jacksonville, Florida told the more than 300 delegates and guests, who witnessed his swearing-in as NaFFAA’s seventh national chairman, that he will strive “to make sure the voices of four million Filipinos living in the United States today carry significant weight.”

The three-day conference amplified this goal. Speakers urged delegates to educate themselves on the issues, help in voter registration drives in their localities and harness the community’s voting power in November.

NaFFAA’s FilAmVote program, launched in January, has been registering new voters in states like California and Nevada where large concentrations of Filipino Americans reside.

“One of the ways of empowerment is to focus on issues, such as the economy, job growth, early childhood education and affordable access to colleges,” said U.S. Rep. Bobby Scott of Virginia, the opening day’s keynote speaker.

“Make sure Filipino Americans are involved in these policy decisions. Make sure to hold politicians accountable. But to make a difference, everyone must participate and exercise their right to vote.”

Flores gave his inaugural remarks at the final evening of the 12th National Empowerment Conference (NEC), held August 4-6 in King of Prussia, Pennsylvania. He has served as NaFFAA National Youth Chair and National Treasurer.

Flores’ community involvement both locally and nationally led him to establish a series of networks, awards and scholarship opportunities for other driven individuals. He is a scholarship grantor for The Public Education Foundation of Las Vegas, and president of the Alumni Leadership Circle of the Academy of Finance.

Currently the Regional Banking District Manager and Vice President at Wells Fargo in Florida, Flores is the president of Emerging Leaders United in Saint John’s County, Florida. He is a graduate of three internal and external leadership executive programs both in Pennsylvania and Florida states.

“I am a true millennial by age with a Gen-X’s heart and passion, a work ethic like a baby-boomer and strong values similar to traditionalists,” he said.

Flores succeeds 64-year-old JT Mallonga, a New York immigration lawyer who served for two years. Preceeding Mallonga was retired engineer Ed Navarra of Bloomfield, Michigan, who was 66 when he was elected to the top post in 2010.

NaFFAA’s founding chairman, Alex Esclamado, was 85 when he led the first empowerment conference in 1997. He was followed by philanthropist Loida Nicolas Lewis, entrepreneur Alma Kern and publisher Greg Macabenta — all in their 60’s when they assumed the national chairmanship. 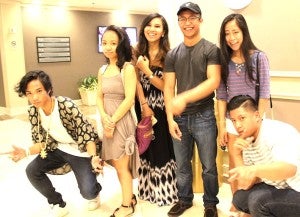 “It’s about time the baby boomers and the millennial generation held the baton together moving forward,” Mallonga said of Flores’ election. “I am encouraged by the participation of many young people, coming from all over the country to make their presence felt in this conference.”

NEC Co-Chair Brad Baldia also applauded how the organization is moving seriously “to build a pipeline of leaders,” with its emphasis on education and leadership development. “This is timely as NaFFAA will be celebrating its 20th anniversary next year. Our newly-elected officers are eager to take the organization to a new level in providing increased value for our members and making NaFFAA self-sustaining.”

‘It’s our time to reach’

The day before the NEC opened, youth delegates spent a full afternoon in workshops, focusing on issues dealing with personal growth as individuals and as communities. Framed by the theme “Reach,” the discussions revisited the conversations held at the last NEC in San Diego, CA., from gay rights to immigration, cultural identity to leadership development. 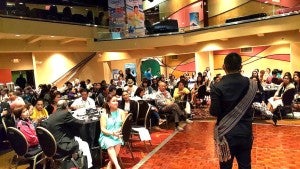 NaFFAA Board Member Steven Raga, a founder of UniPro, said: “We developed a concept to challenge delegates to create a sustainable intergenerational pipeline of leadership for the Filipino American community.”

Like the previous National Empowerment Conference, this year’s gathering was a way of opening up more opportunities for continued engagement between seasoned veterans and the youth.

They are: Brendan Flores of Jacksonville, Fl. as chair; Emraida Kiram of Milwaukee, Wisconsin, as vice chair; Mariella Fletcher of Seattle, Washington, as Secretary; and Brad Baldia of Philadelphia, Pennsylvania, as treasurer.

Also inducted were new members of the Board of Governors: Bing Branigin of Reston, Virginia; Marie Cunning of Phoeniz, Arizona; Steven Raga of New York, NY; and Giselle Rushford of Denver, Colorado.

NaFFAA’s Board of Governors includes 16 members elected at large and the chairs of all 13 regions.

In keeping with the conference theme, “Celebrating our History and Building a Brighter Future,” Vice President Robredo called on NaFFAA “to create programs that will give opportunities for young professionals to understand what is going on in the Philippines and to educate them on how they could be of help to the homeland.”

Robredo is the first top government official to address a national organization in the United States after the May elections in the Philippines.

In her gala dinner speech, she called on the Filipino American community to “share their skills and knowledge to provide a world-class service to the Filipinos back home.” 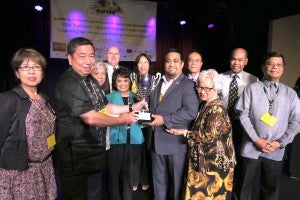 ​Members of the Filipino American Association of Philadelphia accept the Alex Esclamado Community Service Award, which was given to four national organizations. NaFFAA Board members Rodel Rodis and Rozita Lee presented the awards.

At a press conference held earlier in the day, Robredo fielded questions from the media. One asked her to comment on the spate of “extrajudicial killings,” that has raised widespread concerns. While she expressed dismay, she admitted her limitations in being able to influence policy decisions on this matter because “I am only one person.” However, she encouraged the media to “create a mindset that [extra-judicial killing] is wrong.”

Delegates paused to honor Joe Montano, former NaFFAA executive director, who passed away peacefully in his home in Arlington, Va. on Jul 25. He was 47. A passionate civil rights advocate, he was among dozens of youth leaders who led the fight for equity and justice for Filipino veterans in the mid-90’s. He also coordinated NaFFAA’s FilVote from 2000-2002, visiting college campuses across the U.S. to register students and mobilize them to vote.

Dedicating himself completely to public service, Montano was a top aide to U.S. Sen. Tim Kaine who eulogized him at his funeral as “a proud patriotic American” who “was about outreach and bridge building and bringing people together.”

At the Friday night tribute, George Mason University student Kathleen Cabrera played the guitar as she sang a Joe Montano favorite, “Somewhere Over the Rainbow.”