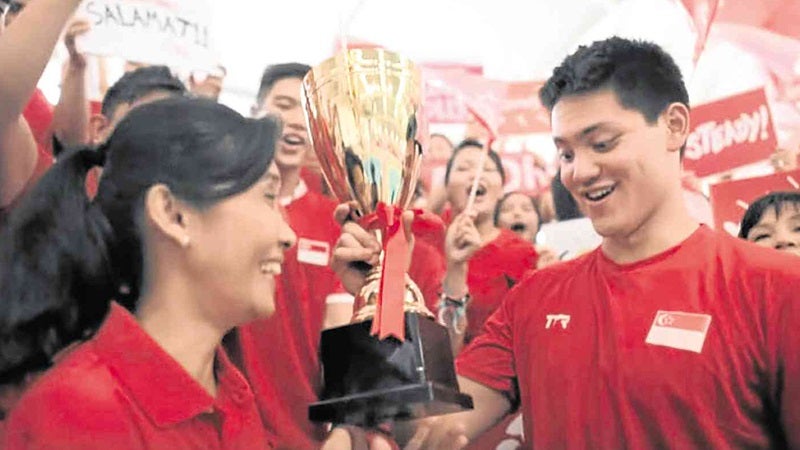 COACHES, teammates and rivals may have seen the evolution of Joseph Schooling, the swimmer.

But very few would have witnessed the boy-to-man story of Singapore’s Olympic champion from diapers to Mizuno trunks who went prospecting in Rio de Janeiro and struck gold.

Filipino Yolanda Pascual, or “Auntie Yolly,” is Schooling’s loyal domestic helper, who has seen him through his formative years to adulthood, although in her loving eyes he is always her “water boy.”

In a Sunday Times phone interview on Sunday, Pascual said: “I’ve always believed in him. I was watching and shouting for him. I cannot express how happy I am … I was jumping and crying after he won.”

Still working for the Schooling household after 19 years, Pascual has always been close to the swimming champ.

The 21-year-old Olympic gold medalist has even called her a “second mom” in a YouTube video made by Singtel, where he showed his appreciation for her support.

The Filipino domestic helper started working for Schooling’s family in 1997.

She recalled: “He was playful like all boys, but [has] always been loving and caring and a very good boy. He never shouts at me or anybody.”

The 56-year-old nanny has a file filled with newspaper clippings of him.

She said: “He’ll always say, ‘I want to be No. 1.’ I remember once we were watching (Michael) Phelps on TV, he told me he wanted to be there and be like him, and I knew he could do it. He has a very strong will; if he wants something, he’ll get it.”

But he never quite had a normal childhood—a sacrifice he made to get into the record books.

“When friends asked [him] to go out, he usually couldn’t because he had practice early the next day,” said Pascual, who is married and has two daughters.

When Schooling experienced lows, she would always be there, behind the scenes, to pick him up.

She said: “He told me when he was very tired and I’d give him a massage. Even now, when he comes back, he still asks for massages and he’s still like the young boy he was before he left.” The Straits Times/Asia News Network