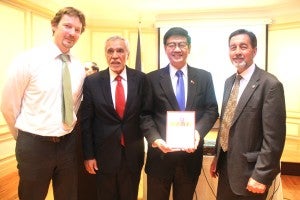 WASHINGTON, DC – Delegates to an international youth leaders’ convention spent an evening at a reception-photo exhibit hosted by the Philippine Embassy to “spread the Filipino spirit” of resilience and friendship.

Several participants in 2016 International Young Leaders Assembly (IYLA) gathered at the Romulo Hall of the Embassy to view the photo exhibit of the book Calidad Humana: Sharing the Filipino Spirit in the evening of August 10.

Calidad Humana or human compassion, defined as a positive and wholesome attitude towards others despite individual differences, is a quality Filipinos are widely known for.

Various photos from the Calidad Humana movement in the Philippines displayed at the Romulo Hall showed “the heartfelt concern, resilient spirit, and genuine smiles emanating from the Filipino spirit and that are an essential part of the Filipino culture,” an Embassy press release stated.

Chargé d’Affairés and Minister Patrick Chuasoto, explained that the photos speak about the Filipino’s “humanness” and how the youth can make use of their talents, skills and knowledge to be of service to humanity.

Ambassador Mayorga lived in the Philippines for six years and his firsthand experience of the positivity and strength of the Filipino character allowed him to edit the book and start the Calidad Humana movement that aims to preserve, share and spread the qualities of the Filipino spirit throughout the world.

The Calidad Humana photo exhibit was also featured at the IYLA on August 8-12 in Washington, D.C. with the title, “IYLA 2016: Sharing the Filipino Heart for Peace in the World.” The exhibit is a way of promoting the positive image of Filipinos to future leaders and young professionals from more than 30 countries. 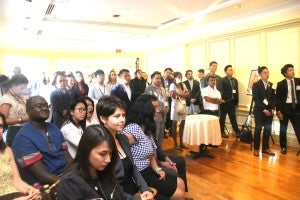 he Philippine Embassy welcomed the IYLA participants and delegates with a special reception and photo exhibit of the book, Calidad Humana: Sharing the Filipino Spirit at the Romulo Hall.​ CONTRIBUTED

“I fervently hope that IYLA’s 10-day interactive program here in the United States will not only provide you a firsthand experience on leadership, but will also plant that seed of inspiration that will enable you to help create a safer and better world in the future,” Chuasoto told IYLA delegates present at the reception.

John Dickson, co-chair of the Host Committee of the 2016 IYLA reminded the IYLA delegates of the importance of understanding their individuality and thinking about how they can contribute to their own countries and to the world.

“What you are doing here, IYLA delegates, is very important in your self-realization, in your growth and patriotism for your own country,” Mr. Dickson said.

IYLA is a  partnership-driven leadership development initiative that empowers promising young leaders to positively impact communities, nations and the world.

The exhibit and reception was organized with the support of the Office of the Undersecretary for International Economic Relations of the Philippine Department of Foreign Affairs.