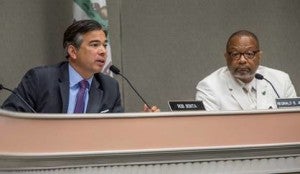 SACRAMENTO, California – Over 400 youth leaders rallied on the steps of the State Capitol steps Monday, August 8, demanding end to police abuse and calling for better schools.

Participants of the #FreeOurDreams rally urged policymakers to pass legislation demanding police accountability, ending the criminalization of youth, and promoting safe and successful schools. The rallyists represented the California Alliance for Boys and Men of Color

Though seventy percent of California’s youth are of color, persistent inequalities in the criminal justice, immigration and education systems have kept them locked up or locked out of opportunity, rally organizers said.

Following the rally, the participants made over a hundred visits with their local representatives to discuss solutions for justice, health, safety and the success of young people of color.

“Today is about allowing and cultivating the youth voice and making it sing, and having it be heard in the halls of power, where the legislative policy decisions are being made,” said Assemblymember Rob Bonta (Dem-Oakland), who, along with Assemblymember Reginald Byron Jones-Sawyer, Sr. (Dem-Los Angeles), chairs the Assembly Select Committee on the Status of Boys and Men of Color.

The rally was preceded by the Assembly Select Committee on the Status of Boys and Men of Color annual progress hearing, where youth leaders from Southern, Central and Northern California gave feedback on the programs and policies supported by the Alliance for Boys and Men of Color related to health, education, employment, juvenile justice, and safety.

Now Celedon is trying to remove this gang association and seal his record before he turns 18. “I am in fear that I was put into a gang database,” he told the committee, referring to a secret tracking system that allows police to label youth a gang member without their knowledge and with little recourse to contest the allegation. Celedon spoke in support of AB 2298, one of many bills being considered this week, which would bring due process and transparency to this secret database.

The Select Committee was established by Assembly Speaker John Perez in 2011. It has partnered with the Alliance for Boys and Men of Color to hold hearings across the state, collecting testimony from more than 2,000 youth, community members, government officials, researchers,] and policy experts about problems, community-led solutions, and policies the state could enact to improve outcomes for its boys and young men of color. The testimonies helped form an action plan with 67 policy priorities, many of which have subsequently been introduced as bills and become California law.

“We need to renew our vows to our black, brown, and [Asian Pacific Islander] youth,” Assemblymember Jones-Sawyer said during the select committee hearing. “As parents, neighbors, voters and policymakers, the greatest gift [we can give them] is ensuring access to success.”

The August 8 hearing also gave state agencies—including the Departments of Health & Human Services, Labor & Workforce Development, Corrections & Rehabilitation, and the Board of State and Community Corrections—the opportunity to testify about progress made in implementing policy recommendations outlined in the action plan. 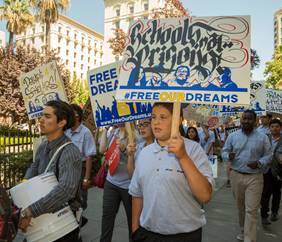 Youth from all over California marching around the Capitol before the Free Our Dreams rally on the West steps of the State Capitol on August 8. CONTRIBUTED

Jahmal Miller, deputy director at the California Department of Public Health Office of Health Equity, highlighted the steep health disparities facing boys and men of color in California and how they are linked with issues of poverty, education and the justice system.

“We need to be innovative and creative and focus on the upstream [factors, on] the causes of the causes,” Miller recommended to the select committee.

By 2020, a third of jobs in California will require at least a college degree, yet youth of color in the state—who make up a growing majority of young workers—face persistent gaps in educational attainment and job readiness.

These inequities have significant economic consequences for the state. According to a 2007 study, African American and Latino men graduating high school generate $681,130 and $451,360 more per person in additional dollars for the state than those who fail to graduate.

This is due to increased tax revenue and economic productivity as well as decreased costs associated with poor health or incarceration.

“These young activists are incredible—they are creative, fearless, loving, and powerful,” said Rosa Aqeel, associate director at PolicyLink, a research and action institute that advances social and economic equity and serves as coordinator for the Alliance for Boys and Men of Color. “With them leading the way as California’s next generation of senators, assembly members, and other change-makers, our future is extremely bright.”