2017 Miss Universe will do wonders for PH tourism 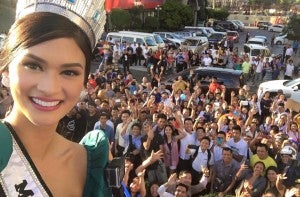 The recent announcement by the Department of Tourism that the Philippines will host the next Miss Universe pageant in January 30, 2017 at the Mall of Asia Arena is another bright news in what many in the tourism sector believe would be another great year for the industry. As a major international event, it will definitely be a big boost to country’s already booming tourism industry.

Tourism Secretary Wanda Tulfo Teo has shown that under her leadership the department is ready to take on the challenge of continuing the progress made by the industry in the past several years.

The secretary, who has firsthand experience in the tourism industry, as a highly successful tour operator in Davao City, said she would continue her predecessor Secretary Ramon Jimenez’s program and slogan “It’s More Fun in the Philippines.”

While Teo acknowledges the success of the “More Fun” brand in increasing awareness of the Philippines as a tourist destination, she said she would look for a better campaign strategy to push the brand.

“We will stick with ‘It’s More Fun in the Philippines’ slogan, but we will come up with a better campaign strategy in the near future,” she said. She promised to meet with different travel and tour organizations, associations, local government units, accommodation and transport sectors to ensure close collaboration between the public and private sectors.

Teo is also planning to meet with former tourism secretaries to pick their brains on successful tourism programs. This bodes well for the industry as the secretary is seeking the counsel of those who have “been there, done that.”

Early in her term as tourism chief executive, Teo deserves commendation for her efforts in having the Philippines host the prestigious and widely watched Miss Universe beauty pageant.

The highly popular pageant is watched all over the world by millions of viewers who are all potential tourists to the Philippines. In addition, pre-event exposure for the Philippines is expected in the qualifying local pageants held in more than a hundred countries that send representatives to the beauty contest.

During the pageant show itself, six Philippine destinations are assured of getting worldwide exposure: Davao City, hometown of President Rodrigo Duterte; Cagayan de Oro, hometown of Miss Universe 2016 Pia Wurtzbach; Boracay and Cebu in the Visayas; and Vigan and Palawan in Luzon. However, the finale will definitely be held in the capital city, Manila.

Can you imagine the exposure that these prime Philippine destinations will get during the airing of the Miss Universe pageant? These places alone will show the world how beautiful the country is and that truly, “It’s More Fun in the Philippines.”

The tourism department should be grateful that the new administration decided to host the Miss Universe pageant. It will save the country millions of dollars that would otherwise be spent for advertising and promotions using various media platforms, such print, broadcast, television, and billboards in major cities across the world to further strengthen the “It’s More Fun in the Philippines” campaign; not to mention the various roadshow presentations that DOT offices overseas regularly conduct in partnership with leading wholesalers of airline tickets, travel agencies and tour organizers to launch promotional and marketing projects

Tourism industry players are excited over the opportunities that the Miss Universe pageant will open to them. The exposure that the Philippines will get in just one event could very well equal or even exceed the results brought by the marketing campaign for four years under the “It’s More Fun in the Philippines.”

Secretary Teo, according to a news report, gave assurance that the private sector has volunteered to cover the $11-million funding needed to host the event. “The government is not going to spend a single centavo on it, it will be the private sector that will shoulder the expenses,” the report quoted her as saying.

With the worldwide buzz, various DOT offices overseas will have an unprecedented boost to their efforts in promoting Philippine tourist destinations to their respective jurisdictions.

Tourism stakeholders should take advantage of the media mileage that the Miss Universe pageant will generate to aggressively promote the Philippines as an exciting tourist destination.

This is the kind of partnership between the government and the private sector that the tourism secretary is hoping to forge to promote Philippine tourism.

Manny V. Ilagan is a Tourism Specialist with over 23 years professional experience in the overseas tourism and travel industry. He is currently the Director for Business Development and Marketing of GTT International/Majestic Vacations, one of the biggest airlines consolidators in the United States, and wholesaler of package tours worldwide. He has written numerous articles on travel and tourism that have been published in various Filipino American newspapers and in Manila-based newspapers. For comments or questions, you may reach him at [email protected]