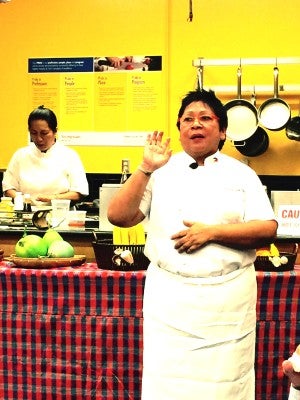 TORONTO, Ontario — Wherever the Filipino may roam, the best route to his or her heart is through the stomach.  Which explains the sold-out events In Toronto for Chef Myrna Dizon Segismundo’s Culinary Cities of the World Manila.

Chef Segismundo was in Toronto through the joint efforts of the Philippine Consulate General in Toronto, the National Commission for Culture and the Arts, and Philippine Airlines.

On June 25, she had a lively exchange with attendees at “Pagkain: a Philippine Food Exhibit” held at the Culinaria Research Center Kitchen, Science Wing at the University of Toronto in its Scarborough Campus.

On June 27, she presided at a chef demo and reception at George Brown College’s Center for Hospitality and Culinary Arts.  On June 28, she prepared the offerings for a formal sit-down dinner called “A Dinner to Remember” at the Chef’s House Restaurant on 215 King Street East.

Asked how her culinary adventure began, Segismundo’s answer was simple:  “I love to eat.” 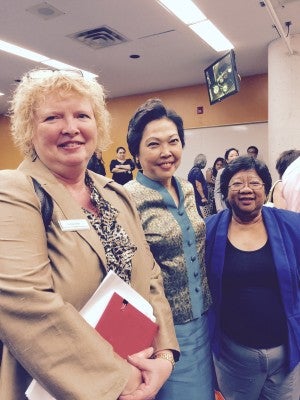 What tips did she dispense to the crowd who hungrily sniffed the results of her demonstration of adobo and guinataang bilo-bilo?

“Use good pork belly, or chicken, and don’t use too much soy sauce, as it toughens the meat.  Better to use achuete or annato water if you want a darker gravy.”

She adds, “Braising is a good technique, for keeping the adobo moist and flavorful.  And refrying the pork,” will heighten the flavor.

The results of her demonstration were served to the eager crowd, who then went on to sample the delicious morsels offered by Toronto’s up and coming Pinoy chefs and restaurateurs at the upper lobby of George Brown’s Adelaide Street East campus.

Chef Myrna is a tireless advocate for the preservation of traditional Filipino cooking.  She has made it her mission to spread the delicious flavors of Philippine cuisine through her Filipino Food Festivals in Hongkong, Singapore, Korea, Japan, India, Israel and the US. 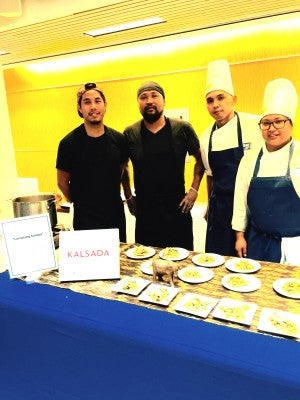 Originally from Lipa, Batangas, Segismundo received her degree from the University of the Philippines in Hotel and Restaurant Administration.  From there she worked in New York City; for four years she was at the Waldorf Astoria Hotel.  Then she went to St. Moritz Hotel on the Park and then the Sheraton Center Hotel.  After her stint in New York she went to work for the Manila Hilton International in the Philippines.

For those who want to follow in her footsteps, Segismundo advises, “Work your way up–learn the basics and the classics first.”

Segismundo has organized Chefs on Parade with the Hotel and Restaurant Association of the Philippines (HRAP).  She also helmed The National Food Showdown as organizer and chair.  The showdown is an annual culinary competition in the Philippines that seeks to elevate the skills of the countyr’s culinary students and professional chefs. 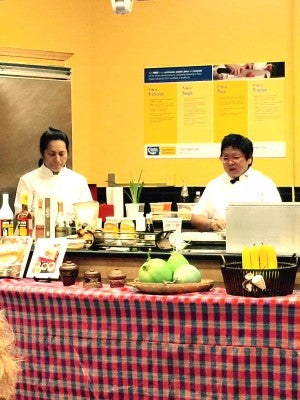 To help spread knowledge and appreciation of Filipino cuisine, Segismundo became part of the Philippine Airlines PInoy Chef Brigade Program.  In February 2015, she gave a demonstration of Philippine cuisine at the prestigious world culinary symposium, Madrid Fusion, in Spain.

This was the first time that the Philippines participated at this event, where world famous chefs met once a year.  In April 2015, Segismundo presented the topic “Coconut, the Tree of Life” at the first Madrid Fusion Manila.

In her private kitchen studio in the Philippines called New Manila, Segismundo develops new recipes and offers consultancy services.  She was managing director of multi-awarded Restaurant 9501 and the Sign of the Anvil Restaurant (at the former PCIBANK head office, now Banco de Oro).