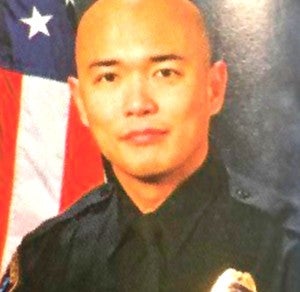 LOS ANGELES — Prosecutors charged a man with murder and attempted murder for allegedly killing one veteran police officer and wounding another during a Thursday, July 28 gun battle in a San Diego neighborhood.

Jesse Gomez, 53, pleaded not guilty to charges filed against him by the San Diego District Attorney’s office on Tuesday, August 2 at UC San Diego Medical Center.

Officers took the suspect to the hospital after he was found bleeding in the Chollas Creek ravine near the scene of a gunfight in Southcrest that left Filipino American police officer Jonathan “JD” De Guzman dead, and his partner, Wade Irwin, wounded.

Gomez allegedly “answered with gunfire” moments after Irwin stepped out of a police cruiser at about 11 p.m. and asked the suspect if he lived in the area, according to Deputy District Attorney Michael Runyon. He said Gomez then proceeded to shoot at De Guzman, striking the veteran police officer with five bullets as he sat in the squad car.

Neither prosecutors nor police have discussed a motive for the shooting.

Gomez’s family members maintain his innocence and told the San Diego Tribune they have received little information from law enforcement.

“No one in my family believes he did this,” said the suspect’s son, Daniel Gomez, 26. “I know he’s been in trouble, like when I was a baby, but after that nothing.”

The elder Gomez possesses a criminal record that goes as far back as 1983, which included several gun-related convictions. A trail of blood originating near the site of the shooting led police to the ravine where he was discovered.

Police also searched for a man who had been walking with Gomez just before Wednesday evening’s violent incident. A second person of interest was detained on unrelated warrants after evading police in two separate standoffs, but was eventually released.

De Guzman and Irwin had been equipped with body cameras, but they were not recording as they approached the suspect, according to the Los Angeles Times. Irwin, a nine-year veteran of the police force, did manage to turn on his camera at some point after he was shot in the throat. He and his partner had been rushed to the hospital by other nearby officers.

Irwin, 32, is expected to survive his injuries. He has regained consciousness but “is looking at a long recovery,” according to a GoFundMe page raising money to help cover Irwin’s medical expenses.

De Guzman, 43, died on Friday, July 29 at Scripps Mercy Hospital as a result of wounds sustained while on duty. He fought to improve the lives of people around him throughout 16 years of service, according to San Diego Police Chief Shelley Zimmerman, who used to work with De Guzman before she was promoted.

“He came to work every single day wanting to just make a positive difference,” said Zimmerman during a press conference on Friday, and described De Guzman as a “loving, caring husband and father.”

The San Diego Police Officers Association is collecting donations on its website to help the fallen officer’s family pay for the funeral and other expenses.

On Friday, Aug. 5, Shadow Mountain Community Church in El Cajon will host an open memorial service for De Guzman at 11 a.m., which California Governor Jerry Brown is scheduled to attend. Other public gatherings honoring De Guzman’s memory had been scheduled earlier in the week.