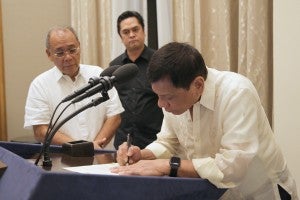 OZAMIZ CITY—Media groups in Southeast Asia have welcomed President Duterte’s order to institute a freedom of information (FOI) mechanism in the executive branch, saying it “measures up” to generally acceptable standards and principles on public transparency.

“Despite some reservations, the FOI executive order is a welcome development in the region where the culture of secrecy and corruption has been the norm,” said Edgardo Legaspi, executive director of the Bangkok-based Southeast Asian Press Alliance (Seapa).

In a statement, Seapa said “information is necessary for people to participate in decision-making” as it noted a “growing demand” for openness and good governance in Southeast Asia. Mr. Duterte’s order “pushes forward the regional landscape toward greater transparency and accountability,” Legaspi said.

The media alliance is composed of 11 organizations from seven countries in Southeast Asia. Its founding members are the Center for Media Freedom and Responsibility and the Philippine Center for Investigative Journalism.

On July 23, Mr. Duterte signed Executive Order No. 2, titled “Operationalizing the People’s Constitutional Right to Information,” fulfilling an earlier promise to go ahead with an FOI mechanism even before Congress enacts the law for it. The order does not cover other branches of government.

Seapa said the EO was founded on a “legal presumption in favor of access to information, public records and official records” and “recognizes the rights enshrined in the 1987 Philippine Constitution … .”

It “acknowledges the government’s existing obligation to make key information accessible such as the regulation on the filing and the availability of statements of assets, liabilities and net worth,” it said. “Sections on the manual, procedure, fees, and keeping of records support the intention of the order to facilitate access of information.”

The alliance also cited the procedure for appeal in case information requests are denied.

“After the FOI bill languished in the legislative mill for 29 years, Congress should take a cue from the President and pass a law applicable to all bodies that use public funds,” Seapa said.

In a separate statement, the Right to Know Right Now! Coalition (R2KRN) described the issuance of the EO as a “major progressive leap on transparency.”

The R2KRN, which have long campaigned for the passage of an FOI law, said it would pursue its initiative and file anew a proposed measure in Congress indirectly. Five other similar bills were filed in the House of Representatives and four in the Senate during the 17th Congress.

“Experience from our FOI practice shows that one of the biggest hurdles in accessing information is the absence of uniform, speedy and mandated procedure for access, which the EO addresses,” R2KRN said.

Legaspi said he hoped other countries “will take this trend further, including within Asean (Association of Southeast Asian Nations) itself as an institution.”

Seapa noted that out of 11 countries in the region, only Indonesia, Thailand and Vietnam have national FOI laws. The states of Selangor and Penang in Malaysia also have such legislation, while Myanmar and Cambodia are working to enact their own versions. SFM