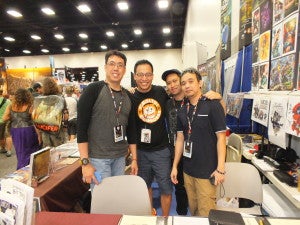 There was Art Directors Guild’s Ed Natividad (Justice League, Suicide Squad), who started out passionately aiming to design cars in Detroit but fell into industrial design. General Motors gave him an internship to its advance concept studio in California. This enabled him to get into ILM (Industrial Light and Magic).

“It was actually easier for me to get into ILM than to get into the union during that time,” he recalled. Now he is a sought after concept artist who was part of the team that designed the functional Batmobile seen in “Batman vs. Superman.” 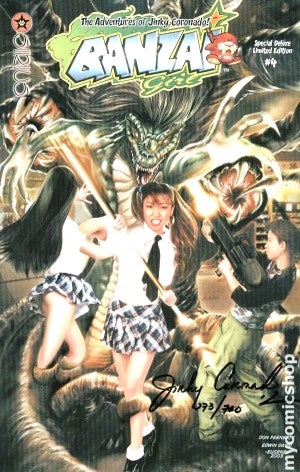 From the Philippines, staffing the 3-Wishes booth, were comic book artists Philip Tan (SPAWN, DC, Marvel) who now sees many opportunities to show one’s work because of the internet, Jay Anacleto who got started with a referral by Whilce Portacio to draw for ARIA from Avalon Studios in 1999, Steven Segovia (currently drawing Dark Wolverine for Marvel and Reign in Hell for DC Comics) and Carlo Pagulayan who got this break with his contribution to the Darkhorse published tribute to 9/11.

Pagulayan’s advice to new creators is “to listen to criticism and be your own worst critic.” All of the artists expressed their early love of comics in the Philippines and were grateful for their opportunities to work for US comic book companies, including Top Cow, Image, Marvel and DC. 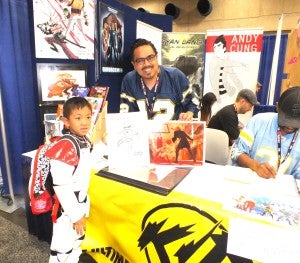 Rubio, a local Fil-Am, said compatriot Ronnie del Carmen helped him get started in Pixar with the film “UP.” As in the popular film “The Debut,” Rubio’s parents were skeptical of his being able to have a successful career as an artist. When Rubio was working on Nickelodeon’s “Avatar: The Last Airbender,” he finally met Dante Basco (voice of Zuko), one of the stars in “The Debut.” While attending Cal Arts Rubio interned with Jim Lee and Whilce Portacio on his first comic book. 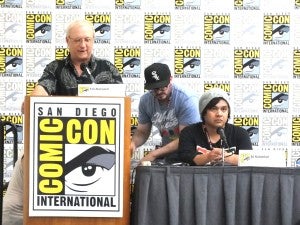 Ed Natividad (seated) is a Hollywood concept artist largely responsible for the Batmobile design in “Batman vs. Superman.” FLORANTE IBANEZ

Another SoCal local is Randy Reynaldo, the independent comic book creator of “Rob Hanes Adventures,” who hails from New York, is self-taught and admits his self-published book is a labor of love. He has built a large fan base by appearing at conventions like the SDCC, which keeps him going. Reynaldo, like many artists who self publish, also holds other jobs.

Filipina artist and occasional model Jinky Coronado from Iloilo, created her comic book, “Banzai Girl” and was self-taught. She was encouraged to create her comic book in 2002 by her comic book creator- husband David Campiti. She incorporates Philippine mythical creatures, like the aswang, in battles with the schoolgirl warrior protagonist. 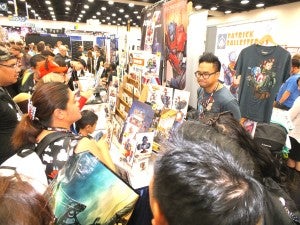 Originally published in the US by Sirius Comics and later Arcana Studio, Coronado now publishes and has artwork online with Keenspot.com. She encourages women and any other interested artists to “keep on drawing to develop your art, be passionate and to be always professional, like being on time and meeting deadlines.” She has hopes in her 11-year-old daughter who already draws eight hours a day, with breaks.

In the Artists Alley, Patrick Ballesteros, a UC Irvine graduate and part of the new crop of young talent, was quickly selling out his cutesy kids as super heroes (“25 Cent Wonders”) also available on his website (http://patrickballesteros.com/). 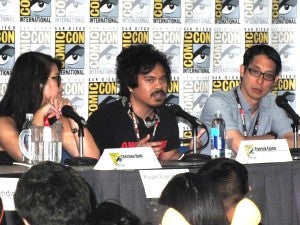 Los Angeles actor Patrick Epino, co-created the film “Awesome Asian Bad Guys.” On the panel “Super Asian America” Epino brought up the mainstream exposure of the Filipino American experience with TV’s “Crazy Ex-Girlfriend” series, and how Filipinos are often left out of the diversity conversation.

Perhaps the most well known among Filipinos who bridge the U.S. and the Philippines is William “Whilce” Portacio, noted for his work on such comic book titles as The Punisher, X-Factor, Uncanny X-Men, Iron Man, Wetworks and Spawn. 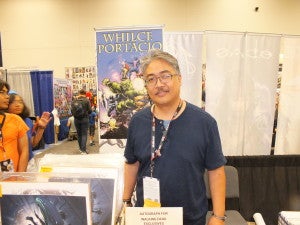 Veteran comic book artist Whilce Portacio was a co-founder of Image Comics and has helped open the door for many fellow Filipinos to the profession. FLORANTE IBANEZ

Portacio was also one of the seven co-founders of Image Comics. He speaks with authority and compassion for the recognition of the large pool of potential and working professional Filipino talent, both here and in the Philippines.