Burying a fake hero: Why Marcos would hate the plan 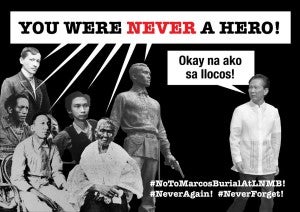 Ferdinand Marcos was infamously bad-tempered about one subject: his bogus war record.

The late dictator was so thin-skinned about his World War II claims he shut down the WE Forum newspaper in 1982 for exposing them as lies.

Now, his family and supporters assume that Marcos would be thrilled about the plan to bury him at the Libingan ng Mga Bayani. After all, this was the president who had a giant concrete bust of himself constructed on the side of a mountain.

But maybe they’re wrong. In fact, I suspect the late tyrant would hate the plan.

Think about it. Marcos has been dead for more than a quarter of a century. He’s been resting comfortably (or at least that appears to be him) in an air-conditioned room in his home province.

Yes, he is still remembered as one of the world’s most corrupt rulers. (Ranked No. 2 by Forbes.) He was even recently included in a Spanish children’s book on the world’s tyrants.

But at least people were starting to forget about his crazy claims about what he did during World War II.

The lowest point for Marcos came in 1986 when major news outlets led by the New York Times ran a series of stories on how Marcos fabricated documents and came up with wild tales in a bid to be recognized as a war hero by the U.S. military.

Those reports came out 30 years ago shortly before Marcos was overthrown. Most people have forgotten them.

But then came the campaign to bury him as a fake hero, which has been endorsed by President Duterte.

Talk about irony: The campaign to honor him as a war hero has ended up highlighting the more accurate portrait of Ferdinand Marcos as one of the world’s most notorious liars.

You can see it happening in social media where memes of Marcos portrayed as the great fake hero are spreading. Thousands have joined such groups as Never Again, Never Forget and the Martial Law Chronicles.

Remember those explosive news reports on how Marcos tried to dupe the American military about what he did during the Japanese occupation?

Well, now Filipinos can actually read the original documents on which those reports were based. U.P. Diliman’s Third World Research Center has created a website where you can download these files.

These include the embarrassing and pretty amusing letter in which Marcos tried to convince the Americans that he was like a Jason Bourne-like character who virtually took on the Japanese forces all by himself.

You can also read the conclusion of U.S. authorities, who dismissed his claims as “fraudulent” and even accused him of committing “a malicious criminal” act for fabricating official documents.

Marcos is also being exposed beyond cyberspace.

In fact, here’s an unexpected twist in the push to bury Marcos at the Libingan ng Mga Bayani: Moving the dictator’s body from Batac to the capital creates new opportunities for letting the nation and the world know about what he did to the country.

In Batac, Marcos is the beloved native son resting peacefully inside a glass box in his hometown.

In Manila, his grave would be the symbol of an ugly and painful past.

For those working hard to let young Filipinos know what happened to us during the Marcos years, Marcos’ grave would become be a convenient rallying point.

In a brilliant campaign called Bawat Bato, activists peacefully gathered at the Libingan ng Mga Bayani to place stones on the site where Marcos is expected to be buried. Written on each stone was the name of one of the thousands of victims of the regime.

We can imagine and launch so many other campaigns.

We could hold study tours with young Filipinos who never knew martial law, to explain why most of the people at the Libingan ng Mga Bayani were heroes — except for one.

We could hold silent pickets with protesters wearing special T-shirts with photos of the dictatorship’s victims.

Or maybe the protesters’ T-shirts would simply say, “Pekeng Bayani” and they would peacefully march around the dictator’s grave.

Ah, so many possibilities, so many creative ideas to explore, so many ways Marcos’ grave could be used to highlight his crimes.

That’s why I really believe that, if he could have a say in the plan for what to do with his remains, Ferdinand Marcos Sr. would probably plead: “Parang awa ninyo na, patahimikin ninyo na lang ako.”

In fact, that’s the view of one of the people Marcos’ thugs tortured but who did not let that stop her from fighting on and resisting his regime.

Bongbong Marcos and his cohort should listen to Etta Rosales, the former chair of the Commission on Human Rights, who seems to care more about showing some respect for his late father’s remains.