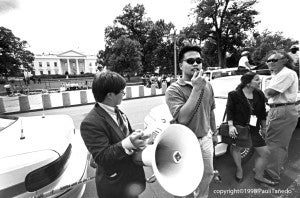 Joe Montano speaking at a demonstration in front of the White House where several Filipino World War II veterans chained themselves to a fence to protest their unjust treatment by the U.S. government. The protest action was organized by NaFFAA during its founding conference in August 1997. PAUL TANEDO

WASHINGTON, D.C. — Hailed by Filipino American leaders, civil rights advocates and elected officials as a committed public servant and passionate Filipino community activist, Joe Montano passed away peacefully on July 25 in his home in Falls Church, Virginia. The cause of his death was not known at press time. He was 47.

Montano’s boss, the Democratic vice presidential nominee, said in a statement that “Joe was an outstanding representative of this office, enthusiastic servant of the people of Northern Virginia, and admired colleague by all who worked with him. We will remember him by his positive energy, tireless work ethic, and infectious smile.”

“We are all saddened and overcome with grief,” says NaFFAA National Chair JT Mallonga. “Joe personified NaFFAA’s aspirations for community empowerment, which he demonstrated in ways that are admirable and inspiring. Our thoughts and prayers are with his loved ones.”

Montano served as NaFFAA’s executive director from 2000-2002. During his tenure, he coordinated NaFFAA’s FilAm Vote, a nationwide voter mobilization program that involved extensive outreach to Filipino American communities and student campuses across the country.

“In the trenches, one could not help but feel his energy. He lived his life to empower the disenfranchised and marginalized and to create pathways for many!” Caoile adds. 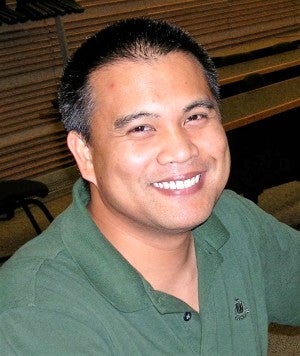 “Joe patiently broke down the importance of the FilVets Full Equity campaign, how critical it is for students to take part in greater community advocacy, and the principle of fighting for those who fought for you. I’ve forgotten many of my FIND experiences, but I won’t forget that. Joe gave me and countless others that initial clarity and motivation to put community before ourselves.”

Proud of his father who served in the U.S. Navy, Montano took up the cause of Filipino World War II veterans “with dedication and zealous commitment,” says NaFFAA National Chair Emeritus Loida Nicolas Lewis. “Joe’s enthusiasm was infectious when he walked the halls of Congress or marched with our veterans on the streets. He always knew what was at stake.”

At NaFFAA’s founding conference in August 1997, Montano was among the youth leaders who rallied the community to march to the White House and support the Filipino veterans’ demand for equity and justice. The Rescission Acts passed by Congress in 1946 stripped them of their rightful benefits.

Because he was “a tireless advocate for issues of concern to both the Filipino American and AAPI communities, we all feel the impact of his loss,” points out Sonny Busa, chairman of the Philippine American Foundation for Charities (PAFC) and a regional director of the Filipino Veterans Recognition and Education Project (FilVetREP).

Charmaine Manansala, the 2008 Obama Campaign AAPI Vote Director, describes Montano as “a giant in the Filipino American community, a strong organizer in Virginia politics, and a mentor to many young Filipino American up and comers. Our community shines a little less bright today but let’s continue the work that Joe loved so well.”

As NaFFAA executive director, Montano represented the organization in Washington’s policy-making circles, working in coalition with other AAPI leaders on such issues as comprehensive immigration reform, hate crimes, workers rights and other civil rights concerns.

“Joe was among the many young people – a new generation of eager activists – who responded in the early 1990s to a call to form Filipino Civil Rights Advocates (FilCRA), a national civil rights organization,” recalls Lillian Galedo, executive director of Filipino Advocates for Justice.

“He shared his passion for political involvement through hard work and humor. (I loved how funny he could be.)  He found his niche in electoral politics — fired up by the election of the first African American president; working tirelessly for liberal and progressive candidates.  Joe embodied his generation’s desire to bring the Filipino community to the national political stage,” Galedo adds.

During his college days at George Washington University, Montano pursued more than a passing interest in Philippine history, arts and culture. Like many of his contemporaries who were born in the U.S., he wanted to learn as much as he could about his roots and national heritage. The Philippine Cultural Society at GWU provided a venue for exploring cultural identity and sharing experiences with other students.

QBD Ink director Reme Grefalda remembers Montano’s auspicious start, and how he racked up a variety of roles: as a menacing military goon in  “Hacienda the Musical,” as a runaway teen mentored by Rizal in “Oyang Dapitana,” as a member of the firing squad that killed Rizal, and as a member of the tribunal in “In the Matter of Willie Grayson.” Joe the actor also extended to being stage manager, stagehand and assistant to the producer.

“Joe realized early on that the children need to have role models and to be anchored to their birth culture in their ongoing struggle to define who they are and what they bring to the table, especially in the context of being Filipino American,” says Mencie Hairston, a founder of Mabuhay.

“At camp, you saw several kids hanging on to him and competing for his attention.  Of course, he always managed to be the ‘coolest’ kuya (big brother) in the room,” Hairston recalls.

US Rep. Don Beyer praised Montano as “a voice for the people of Northern Virginia” who was “committed to achieving progress through public service. We need more like him, and his death at such a young age fills me with sorrow.”

Born in Norfolk, Virginia, Joe Montano is survived by his parents, Lori and Jose Montano, his sister, Amy Lopez, and brother, Ben.