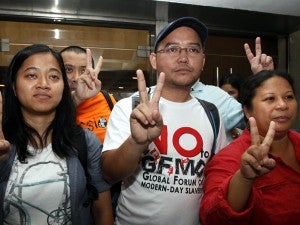 HONG KONG—A Filipino maid won the opening legal battle in her fight for permanent residency after a court ruled on Friday that an immigration provision excluding hundreds of thousands of foreign maids was unconstitutional.

The decision to grant Evangeline Banao Vallejos the right to apply for residency under the Basic Law—Hong Kong’s constitution—was a major legal victory in a case that has divided the city with accusations of ethnic discrimination against the foreign maids.

Vallejos, who was not in court because she was busy working, “said thank God” after learning the outcome, said one of the lawyers handling her case.

Residents say the verdict would open the floodgate to about 292,000 foreign maids, most of whom are from the Philippines or Indonesia, to also claim the right of abode.

The decision could also draw in Beijing, which might seek to reinterpret the laws under which the territory is governed, analysts said.

Justice Johnson Lam, ruling in the Court of First Instance, said the immigration provision denying the maids the right to gain permanent residency after seven years—as other foreign residents can—was inconsistent with the Basic Law.

The government is likely to appeal the ruling.

Vallejos, a longtime foreign domestic helper, sought a judicial review after her bid for permanent residency was rejected.

“The mere maintenance of link with her country of origin does not mean that (a maid) is not ordinarily a resident in Hong Kong,” Lam wrote in a 78-page judgment.

Lam said it was unconstitutional to deny foreign maids the right of residency even though many were employed on short term, two year contracts, that are often repeatedly renewed.

Under Hong Kong’s constitution, foreigners are entitled to permanent residency—and with it, rights to voting, welfare and other services—if they have resided here for a continuous period of seven years. But maids were specifically excluded.

‘Win for rule of law’

Vallejos challenged the restriction, saying it was unconstitutional and discriminatory, but the government argued in court it was “appropriate” and that it was empowered to define who was eligible for residency.

“To be clear, Ms Vallejos won on the unconstitutionality of the provisions,” said Mark Daly, one of her lawyers.

Daly lauded the court’s decision as “a good win for the rule of law.” He said Vallejos also “thanks all the people who have helped her, including her employer and her lawyers.”

“She is busy working so she has no time to be here today,” he added.

Vallejos has worked as a maid in Hong Kong since 1986. She applied last year for the judicial review after the immigration department rejected her permanent residency application in 2008.

Daly said he expected the government to appeal within the 28-day deadline. Another court hearing will be held on Oct. 26 on whether Vallejos can now be declared a permanent resident.

Two similar cases involving five Filipino helpers are set to go before the courts in October.

The case has divided opinion in Hong Kong, with some arguing that immigration provisions barring maids from applying amounts to ethnic discrimination.

The vast majority of the city’s 292,000 foreign domestic helpers—most of whom are women—are from the Philippines or Indonesia, but some also come from Thailand, Nepal, India, Pakistan and Sri Lanka.

The immigration department website puts the number of Filipino maids in Hong Kong at about 120,000. A Reuters news agency report put their number at 139,000 and the number of Indonesians at 146,000.

Of the total number of foreign maids, 117,000 have been continuously working in Hong Kong for more than seven years and potentially eligible for residency based on the court’s judgement.

Foreign maids in Hong Kong are entitled to better working conditions than in other parts of Asia—they are guaranteed one day-off a week, paid sick leave, and a minimum wage of HK$3,740 ($480, or P20,000) a month.

The maids are a big source of help to the middle and upper classes of Hong Kong, where it’s common for families to employ one or more to live with them to do household chores and look after children.

But many complain that giving the maids permanent residency would result in an influx of their family members, which would put a strain on the densely populated city’s housing, schools and other resources.

“I am personally disappointed by the judgment,” Hong Kong chief executive Donald Tsang told reporters. “One thing is quite clear. We are fully prepared for an adverse judgment at this stage and for that reason we would be doing what we need to do.”

Hong Kong, a British colony for 150 years, returned to Chinese rule in 1997 and is supposed to retain a high level of internal autonomy.

Several dozen people protested outside the courthouse against the maids as the ruling was released. They carried placards and chanted “Civic Party betrayed Hong Kong!”—a reference to pro-democracy legislators, who backed the maids.

The money sent home by the maids is a big source of income for their families. According to the Philippine government, workers in Hong Kong accounted for $312 million of the $18.8 billion sent home by expatriate workers last year, or about 10 percent of the country’s annual gross domestic product. Reports from Reuters, AP, AFP and Inquirer Research